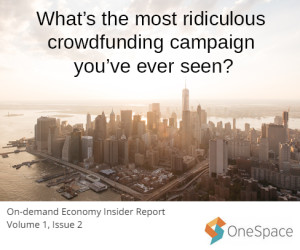 In this week’s edition of the OneSpace On-demand Economy Insider Report, we take a quick look at how businesses can harness the power of crowdsourcing and have a little fun with poorly conceived GoFundMe crowdfunding campaigns.

Three advantages to crowdsourcing for businesses

We can think of at least a dozen, but Varsity Tutors CEO and founder, Chuck Cohn, only had so much space to work with in his Jan. 11 post for Entrepreneur.com, so he had to limit his thoughts to ideas, content and labor.

Cohn, whose company connects students with personalized instruction online, covers how to drive new ideas and reduce innovation costs by crowdsourcing solutions. He also notes that contracting with a crowdsourced workforce can be “especially useful for those companies whose labor-intensive solutions revolve around simple or familiar tasks.”

Finally, Cohn summarizes the benefits of using the public to crowdsource certain types of basic content, stating that “crowd-created content can also be more valuable to consumers, as information provided by the public is often seen as more believable or trustworthy than marketing content.”

Crowdfunding sites have done a ton of good for many people in need, letting donors from around the world work together by making small monetary contributions for a common cause.

On the other hand, these sites have also been outrageously exploited, and those stories are a lot more fun.

Ranker’s Ashley Reign ranked what she considers some of the dumbest GoFundMe campaigns ever in a Jan. 14 post, and there’s no shortage of crazy in the list. Per Reign’s post, people’s wild requests included the following:

But at least they’re not Cinnamon Nicole

You’ll be heartbroken to learn that the tyrants who run GoFundMe won’t let you follow your heart (and toss out your brain) by donating to this Tennessee woman’s campaign.

As posted Jan. 14 by Shenequa Golding on Vibe (later republished on Yahoo), the crowdfunding site quashed Nicole’s request for donations after she supposedly spent all her money on Powerball tickets.

“We spent all of our money on lottery tickets (expecting to win the 1.5 billion) and are now in dire need of cash,” Nicole claimed in her campaign summary.

To be fair, it sounds like it was all a joke, because Nicole also said, “With your small donation … I’m certain that we will be able to pick ourselves up … and spend another fortune trying to hit it big again!”

The craziest part? For some reason, people actually pledged over $600 in donations before GoFundMe pulled the plug. The only greater waste of money we can imagine is, well, spending all your money on Powerball tickets.