The Good, the Bad and the … Robots? 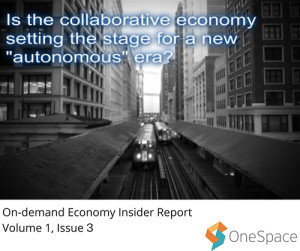 In this week’s edition of the OneSpace On-demand Economy Insider Report, we look at how the on-demand economy is growing up, consider benefits of the sharing economy and prepare for machines to take over the world.

The on-demand economy grows up

We’re going to trust that Tanner Hackett knows what he’s talking about when he posts about how the on-demand economy is maturing. For one reason, among his other accomplishments, Hackett lists himself on LinkedIn as a cofounder of “The On-Demand Economy.”

That’s a brilliant bit of branding, frankly: According to its website, “The On-Demand Economy is a group of executives dedicated to the advancement of the commerce-based solutions that make day-to-day life simpler and more efficient.”

Hackett, who is also the cofounder of Button, contends in his Jan. 21 post that the media hasn’t paid sufficient attention to how much the on-demand economy has developed over the past 12 months.

In the near future, Hackett writes, “we expect a variety of large structural changes in consumer habits, competition, investment, technology, and regulation to further the divide between the run-of-the-mill startups and the true disruptors in The On-Demand Economy.”

(And yes, he capitalizes it every time. Seriously, this guy knows his branding.)

The proliferation of services specifically designed to cater to mobile devices, Hackett notes, creates enormous opportunities for on-demand business. However, he indicates that businesses won’t have the same “easy access to capital” this year that they had in 2015.

Hackett also addresses the issue of when employment law might evolve to address questions of worker classification in the gig economy. He doesn’t think major developments are imminent: “Don’t hold your breath for any sweeping federal policy changes and legal resolution in 2016.”

Reasons to welcome the sharing economy

Relander is the founder and CEO of Launch & Hustle, which only sounds like a ’90s-era TV show about two rule-bending cops on a mission to clean up the streets by any means necessary. The company provides services, such as content marketing, digital strategy and lead generation, to growing businesses.

Among Relander’s takes: The sharing economy provides for peer-to-peer business lending, benefiting individual lenders and borrowers; it’s creating “micro-entrepreneurs” thanks to minimal startup costs; and it allows for barter-based service agreements that create value without any money changing hands.

The robot apocalypse is nigh

In a post Jan. 18 on his business blog, Crowd Companies Council founder Jeremiah Owyang advised us that human workers will soon be entirely replaced by machines because robots don’t eat or sleep or fight over whether the office thermostat should be 73 or 74 degrees (because that makes a huge difference and Debbie didn’t bring a cardigan today).

That might be a slight embellishment of Owyang’s thesis, but he is proposing that the collaborative economy is setting the stage for new business models in the “autonomous world,” a new digital era that can be summarized in one word: robots.

Owyang argues that widespread adoption of on-demand business models for accessing products and services was a crucial step toward innovation into autonomous technologies: “Autonomous technologies like self-driving cars are going to extend the access model by enabling cars to be hailed on-demand rather than having to own vehicles.”

Which brings us to Maven, the new car-sharing service being launched by General Motors. In a Jan. 21 post for Wired, author Alex Davies says Maven is actually “the foundation for the self-driving car network GM wants to build” eventually.

With a headline stating that Maven is “really about a driverless future,” the post notes that the emerging car-sharing industry “will be completely remade by autonomous vehicles, and GM is trying to position itself for that change now.”

It’s one thing for Google to experiment with self-driving cars. If a carmaker that’s been operating for a century is preparing for a driverless future, we actually might be on the verge of a truly autonomous world.