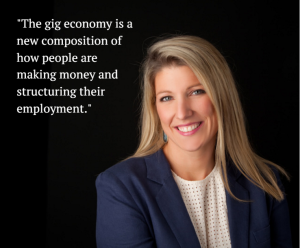 The gig economy allows skilled workers to be productive at any time and from wherever they want to work. When EQ, an online publication focused on the St. Louis startup scene, wanted to learn more about the gig economy, it turned to our CEO, Stephanie Leffler. Stephanie spoke about the way OneSpace is shaping the gig economy, her influences and her goals.

OneSpace and the gig economy

Stephanie explained that the gig economy has been around for a while, but that the opportunities to connect people with flexible work online are new.

OneSpace helps retailers, publishers and other large companies find talent at scale. OneSpace has worked with 482,000 freelancers to complete more than 106 million gigs, and that number keeps going up. So far, 14 of the top 30 online retailers use the OneSpace platform to access, integrate and manage virtual teams.

Stephanie has a strong record of entrepreneurship. Previously, she co-founded a startup called MonsterCommerce. After it was acquired, she co-founded a publishing company that worked with freelancers. Out of necessity, the company developed software tools for managing a sizeable group of remote workers, paving the way for Stephanie’s leadership at OneSpace helping businesses leverage a huge freelance workforce.

Stephanie and her team joke that OneSpace is located in Swansea-Con Valley because the OneSpace office in Swansea, Illinois, is very close to the St. Louis startup scene, just as Bay Area companies have all the other startups in the San Francisco area nearby.

Stephanie got her start in gig work at a young age when she sold painted rocks door to door. When she was a little older, she moved into babysitting. Then in college, she juggled three or four part-time jobs. Those were traditional jobs that required her to go to a workplace, but she says that if she’d had the opportunity to work from anywhere, that would have been even better.

Stephanie said that she’s been influenced by her dad, who is a trial lawyer and a great storyteller. Stephanie learned to feel comfortable leading a room of people and being persuasive from watching him.

Looking to the future

Stephanie told EQ that her goals are for her family and her daughter to find happiness. She also strives to support her team so that they’re happy with the investment they make in their work.

Check out the full interview in EQ for more of Stephanie’s thoughts on the gig economy.