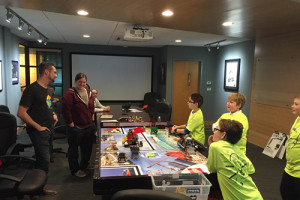 Over the last several months, the OneSpace office has served as the meeting headquarters for “ElectroBotz,” a local FIRST (For Inspiration and Recognition of Science and Technology) LEGO® League (FLL) team. Led by coach Scott Underwood and his wife, the team comprises students in 4th to 8th grades, and the season runs from the summer until the local championship in December.

The FLL program is designed to inspire students to embrace science, technology and engineering and provide hands-on learning opportunities that help participants develop these skills.

Each FLL team works together throughout the season on a project designed to improve or address a real-world issue, based upon an assigned topic. The competition also includes a robotic component, called The Robot Game. Teams compete with robots they have built in advance out of LEGO® parts and programmed by themselves. 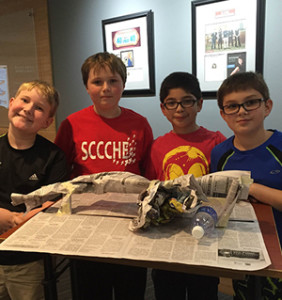 In 2015, the theme of the competition was Trash Trek. The ElectroBotz team joined Missouri River Relief in cleaning up the river for two hours, gathering an incredible amount of trash. The team decided to develop a Creek Cleanup System for the competition.

Another central component of the program is the Core Values. Teams are encouraged to learn and integrate them throughout the competition.

“The FLL Core Values teach them positive values, such as being open to other people’s ideas, working together, providing constructive criticism and combining the best parts of many ideas to come up with a unique solution to a problem,” said Underwood.

Underwood, a software engineer, first visited OneSpace a few years ago. Before the 2015 FLL season began, he realized that it would be a great environment for his team to work in. 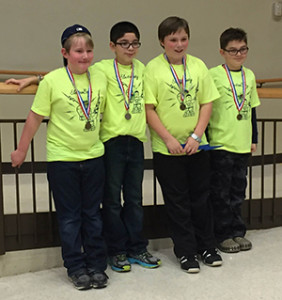 “Being in an office with developers and engineers using math and science in a fun environment was amazing for these kids,” Underwood said. “The OneSpace leadership team allowed ElectroBotz to use their Bamboo Room [a conference room] for weekly meetings, with access to large whiteboards and a projector. The team also was able to visit the lounge and enjoy snacks and play games. It was a great experience, and we are looking forward to next year!”

It’s no secret that the OneSpace team is passionate about innovation and learning, so this opportunity to partner with FLL’s ElectroBotz was truly a win-win! We can’t wait to see what the future holds for these students.

FIRST was established in 1989 by Dean Kamen. In 1998, Kamen joined forces with LEGO® Group owner, Kjeld Kirk Kristiansen to form FIRST LEGO® League. Since then, over 233,000 participants have competed in 80 countries, helping students across the globe learn critical thinking and team-building skills, as well as basic STEM applications. The international FIRST LEGO® League competition has been held in St. Louis for the last several years.