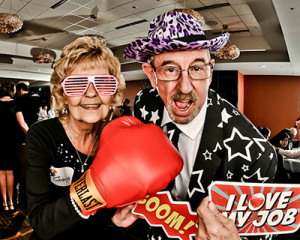 Work hard, play hard … the OneSpace team takes that mantra seriously. On Saturday, Jan. 16, the team arrived at the Ballpark Hilton Conference Center in downtown St. Louis, dressed to the nines and ready to celebrate. This year’s annual company party had a cool Casino Night vibe, but the achievements of 2015 didn’t happen by chance. Hard work, innovation and a collaborative team effort launched OneSpace to new heights in 2015.

Even more important than all that, though, was the fact that the festivities served as a giant, team-building exercise. (That’s our story, and we’re sticking to it.) Here’s how:

Many people believe that the secret to encouraging bonding between team members involves relay races or camping retreats. It turns out an open bar and a festive atmosphere work just as well.

As the night began, team members and their plus-ones enjoyed a classy cocktail hour, where light conversation and introductions mixed with spirited exclamations over the array of fashion choices.

Classic party attire suited the majority of attendees, but a few showed off a more unconventional style, including our facilities manager, Hutch, who arrived sporting a black suit adorned with large white stars.

Following cocktails, the team adjourned to the ballroom for a buffet-style dinner, complete with salad bar and baked-potato bar, a stir-fry station, and two carving stations.

With such a large, hungry group, line-coordination was key. After determining that a single, long line was an unsatisfactory option, team members split up to visit the various stations out of order, allowing for more efficient plate-filling and resulting in reduced time to table. No squabbles or accusations of “line-cutting” were witnessed. Cooperation between team members in this unrehearsed endeavor was seamless.

Following the meal, OneSpace CEO Stephanie Leffler presented a brief Year-in-Review slideshow. She welcomed the 22 individuals who joined the team in 2015, congratulated team members who married or had babies over the course of the year, recognized the accomplishments of each department, and highlighted company-wide initiatives.

The team raised a toast to one initiative in particular: the successful rebrand from CrowdSource to OneSpace. This was an all-hands-on-deck endeavor, but one team member stood out for her leadership role in the project, earning her the night’s top honor.

Brittany Corners, OneSpace Director of Marketing & Communications, was presented with the 3rd Annual Hutch Award, an accolade (and trophy!) given to a team member who consistently goes above and beyond to ensure both company and team success. Known for her cheerful demeanor and unparalleled work ethic, Brittany embodies the OneSpace core values. This award is well-deserved!

“Brittany crying when she won the Hutch award.” (Aaron Eversgerd)

Following the presentation, the revels began in earnest and continued late into the night.

In the center of the ballroom, the Dirty Muggs, a local band specializing in an eclectic mix of hip hop, soul, rap and funk rock kept the tempo up and the dance floor packed for hours. With unflagging energy, the band shared in the celebration, with lead singers Justin Clay and Cassandra Llea regularly jumping off the stage to join OneSpace team members as they got their dance on.

“Crushing the dance floor all night and getting over 19,000 steps.” (Melodie Heberer)

And it wasn’t just the band that delivered an outstanding show. OneSpace co-founder and CEO Stephanie Leffler received delighted cheers and applause when she joined Clay on stage and delivered a flawless performance of OPP by Naughty by Nature.

On one side of the ballroom, team members practiced their problem solving skills with casino games, including craps, roulette, poker and blackjack. Team members played for chips to remit for raffle tickets, and many bonds were forged as they celebrated wins and commiserated over losses.

“The casino games; they encouraged a lot of cross team interaction!” (Amanda Wobbe)
“A lot of high fives and a lot of energy at the casino games!” (Jason Ellis)
“Betting all my chips on black … and winning.” (Josh Henry)
“Making bank at the casino.” (Caitlin Breuer)
“Rolling craps for 20 minutes! You could say I was…on a roll.” (Maggie McLeod)

Finally, team members demonstrated that they have each others’ backs without any need for classic trust exercises. The main party in the ballroom ended at midnight, but many weren’t ready to call it a night. Refusing to let their colleagues down, numerous dedicated team members made their way up to the 360 Bar at the top of the hotel to continue the celebration.

The OneSpace annual party was the perfect way to kick off the new year and strengthen an already incredible team. After solidifying our collective commitment to changing the way the world works, OneSpace is excited for what lies ahead in 2016.

Interested in joining the OneSpace team? We are currently accepting applications. Check out our open positions and apply today.