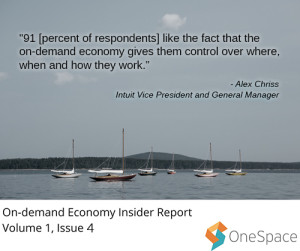 In this week’s edition of the OneSpace On-demand Economy Insider Report, topics range from a federal decision to more closely track statistics on contingent workers to an Airbnb listing for an igloo in Brooklyn.

A federal Department of Labor blog might sound about as fascinating as assembly instructions for an end table from IKEA, but something genuinely interesting popped up last week.

U.S. Secretary of Labor Tom Perez mentioned in his Jan. 25 post that the Bureau of Labor Statistics will start tracking statistics on what he referred to as “contingent workers.” It will be a supplement to the bureau’s monthly population survey, with results planned for the May 2017 edition.

In his post, Perez said the information will provide “reliable, credible insight into what’s going on across a range of work arrangements – from independent contractors to temporary employees to workers holding multiple jobs at the same time.”

It’s been more than a decade since the BLS last surveyed Americans about nontraditional work arrangements. In a post published Jan. 29 on LinkedIn Pulse, Alex Chriss said bringing back this survey focus was “welcome news indeed.”

“Much of the debate that has been raging about worker classification has taken place without the benefit of objective data or any sophisticated analysis of on-demand workers themselves,” wrote Chriss, the vice president and general manager of Intuit.

In his post, Chriss used the Department of Labor announcement as a jumping-off point for his argument that the on-demand economy is reshaping the 40-hour work week. He also cited statistics from a survey Intuit conducted in partnership with Emergent Research.

The post makes numerous interesting points, but one in particular is especially enlightening.

Chriss reported: “Instead of a plea for a more predictable fixed schedule … 91 [percent of respondents] like the fact that the on-demand economy gives them control over where, when and how they work.”

Additionally, almost half (46 percent) of respondents, Chriss noted, said their primary motivation for doing on-demand work “is to create and control their own schedule.” Only 11 percent “reported turning to on-demand work because of an inability to find a job.”

Iced out of a place to stay? Snow problem at all.

On a lighter note, Dan Milano wrote a post Jan. 24 for Distractify about a guy in Brooklyn who built a “Boutique Winter Igloo” during last week’s blizzard. He listed it on Airbnb, naturally, for $200 a night.

Had the igloo been in Manhattan, its creator probably would have been in business. That’s a steal for so much space.

Alas, Airbnb quickly sent out a takedown notice for the post, but we have to give the company points for having fun with it.

The notice read: “Unfortunately, your igloo, while very well constructed, has failed to meet our occupancy standards and has been removed from search results. Be sure to pick a place with running water, electricity, and a roof that doesn’t melt.”

The artist who left a full-time gig for freelancing

The term “starving artist” exists for a reason. It’s challenging for most people to make a living with their art, so it might be surprising when an artist walks away from a full-time job to freelance. But that’s what Faye Brown did, as she explained to Skillshare.

Skillshare is a site where people share their expertise with others, effectively allowing anyone to be a teacher. (OneSpace has no affiliation with Skillshare.) On Jan. 28, the site profiled Brown, a freelance graphic designer and animator who teaches on the site, on why she went freelance.

Brown said she’d worked at a design studio for about 10 years, and that she’d been happy for the most part. But she became concerned about office politics and felt her career wasn’t progressing.

Additionally, “Once I started really thinking about our long-term plans of having a family, it really started to make sense,” said Brown, who has two children. “Lots of long hours and an extended commute wasn’t [sic] conducive to family life.”

The interview touches on the pros and cons of Brown’s decision. It (understandably) includes a little bit of promotion for Skillshare, but overall it’s an interesting read for anyone considering the freelance life.