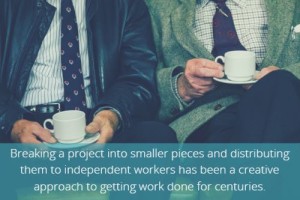 It might seem like crowdsourcing work is purely a 21st-century innovation. The term “crowdsourcing” itself was coined in 2005 by Wired magazine editors Jeff Howe and Mark Robinson and subsequently popularized a year later when Howe used it in an article and a companion blog post.

Regardless, while the term is fairly new, the idea is not. Breaking a project into smaller pieces and distributing them to independent workers has been a creative approach to getting work done for centuries.

However, it wasn’t until recently that distributing work through microtasks became an efficient way of doing business. The agricultural and industrial economies of the past were not well suited to large-scale implementation of a distributed model.

Before the digital age, virtually every type of work required one’s physical presence at the workplace itself. Modern technology allows project managers to assemble a worldwide team of freelancers to tackle problems that would previously have been all but unmanageable.

Innovation as a contest

One example of problem solving by using a “crowd” – essentially, any large group of people – goes back more than 300 years. In 1714, the British government voted to offer ₤20,000 (today, ₤2.5 million, or over $3.5 million U.S.) to anyone who could work out a method for determining longitude at sea.

Two entrants – a team of professional astronomers and a working-class clockmaker – effectively solved the problem from different angles, but the commission ultimately failed to pay out the prize for technical reasons. Today, such a result would trigger a multitude of lawsuits, but in 18th-century Britain, the problem solvers were out of luck (although the clockmaker’s entry eventually became the first effective marine chronometer).

Regardless, this early example of what we now call an inducement-prize contest, less formally known as a “challenge prize,” proved such ventures could produce results.

The Internet provides an ideal environment for companies and think-tanks to challenge innovators all over the world to contribute solutions to a wide array of challenges.

For example, the virtual solutions generator, InnoCentive posts a variety of science and technology challenges on its website for students, engineers, scientists and the curious to browse. Those who submit the best solutions to these problems are eligible to win cash prizes, as well as the prestige of having provided a solution that could make a meaningful difference to business, the economy and the world.

Piecework in the 20th century

Centuries after Britain’s longitude contest, shrewd industrialists began to tap the power of the crowd to improve their bottom lines. The Industrial Revolution had driven farm laborers into cities to take up work in factories and mills. In order to encourage productivity, many factories engaged in a practice called “piecework,” which involved paying workers a fixed rate nor per hour or per day, but for each item produced or specific action performed.

In the late 1930s, former pieceworker William Dunbar described what knifemaking had been like 60 years earlier:

And it was a good place to work too. All piece work. You could do just about as you was a mind to, and do your work whenever you wanted to as long as you got it done. … Way I look at it, it was an ideal system for any factory. The help had a kind of independent spirit, and they were satisfied.

The independent pieceworker model, profitable though it was, was destined to be a footnote in the history of heavy industry. With the advent of moving assembly lines, work became more regimented, and workers were placed under progressively stricter workplace discipline.

A new age for distributed work

It wasn’t until the 21st century that companies began to take advantage of distributed work models in earnest. Although personal computers and the Internet had been around for a while when the new millennium arrived, distributing work on a broad basis required widespread global adoption.

In 2004, author James Surowiecki published The Wisdom of Crowds, a book about broadly distributing intellectual and creative tasks to get a large aggregate return. Under the right conditions, Surowiecki argued, crowds can produce better results than skilled individuals.

The book is essentially a paean to a democratized workplace, where diversity – and even individual eccentricity – become strengths, rather than liabilities. In fact, its elaborate subtitle is “Why the Many Are Smarter than the Few and How Collective Wisdom Shapes Business.”

Key to the successful implementation of crowdsourcing techniques is what Surowiecki called “aggregation,” the system that corrals independent producers and coordinates their efforts.

With modern communications technology, this aggregation can be achieved – typically through a shared online platform – with contributors from all over the world. Each freelance worker brings a unique skill set to the job – such as data collection, graphic design, speech transcription or long-form writing – and assignments can be distributed on what is often a first-come, first-served basis.

The power of today’s crowds

The marriage of 19th-century organizing principles and 21st-century technology has made the aggregation of large crowds effective in a way that was never possible in the past.

As of October 2015, according to a large-scale survey, roughly 54 million Americans – over one-third of the adult workforce – were doing some form of freelance work. Those numbers keep rising as the sharing economy grows.

In addition to the increasing independence of workers, several high-profile efforts have emerged in the last decade that demonstrate the power of the distributed workforce.

A popular example is Wikipedia, the online encyclopedia built by thousands of volunteer contributors. Other examples include Doritos, which has run consumer-created ads during the Super Bowl for several years, and the Waze app, which uses driving information from a massive user base to communicate traffic issues and improve driving times. Even the U.S. Department of Defense has crowdsourced ideas on how to improve disaster response.

Not an industry to hesitate to follow trends, many online retailers now use freelancer-powered platforms to outsource many of their needs, such as writing product descriptions, adding product attributes, improving search efficiency and analyzing data. Such platforms help clients complete vast amounts of work quickly, affordably and at scale.

Crowdsourcing has been around for centuries, but its great potential has only been tapped recently thanks to today’s technological advances. Today’s distributed workforce is a cornerstone of the sharing economy that is changing the way all business is done.