In one of the largest acquisitions in the company’s history, Target announced on Wednesday that it has agreed to purchase grocery delivery startup Shipt for $550 million in cash. The acquisition will bring same-day delivery services to customers at roughly half of Target stores by early next year, with plans to make the service available to a majority of stores (and all major markets) by the 2018 holiday season.

Target customers will be able to use the Shipt platform to order groceries and other household essentials online and have them delivered to their homes the same day. By the end of 2019, that service will expand to include all major product categories. An annual Shipt membership costs $99 and includes unlimited deliveries.

“If you look at the big picture, this acquisition will mark an important milestone in an ambitious strategy we laid out in early 2017, which included strengthening Target’s supply chain and digital capabilities to make shopping at Target easier, more reliable and more convenient for our guests,” said John Mulligan, Chief Operating Officer at Target.

This strategy, announced in February of this year, involves an investment of $7 billion in capital over the next three years and roughly $1 billion in annual operating profits beginning in 2017. The goal? “To grow sales faster, gain market share, adapt to guests’ rapidly changing preferences and give them even more reasons to choose Target.”

And the company hasn’t wasted time getting to work. The Shipt acquisition marks the latest in a long list of advancements the company has made this year, including:

Target’s substantial investments in enhanced supply chain and digital capabilities are a direct response to consumers’ increased demands for faster, more cost-effective delivery options. According to a survey by Temando (via Business Insider), four out of five shoppers now want same-day delivery. Unfortunately, only half of today’s retailers offer it.

By investing in enhanced delivery capabilities, Target will not only be able to increase its short-term revenue, but it will also be able to prove its staying power. A recent study conducted by Forrester Consulting (commissioned by American Express) found that same-day delivery and one-hour delivery (by drone) are two capabilities that can significantly increase shoppers’ brand loyalty. 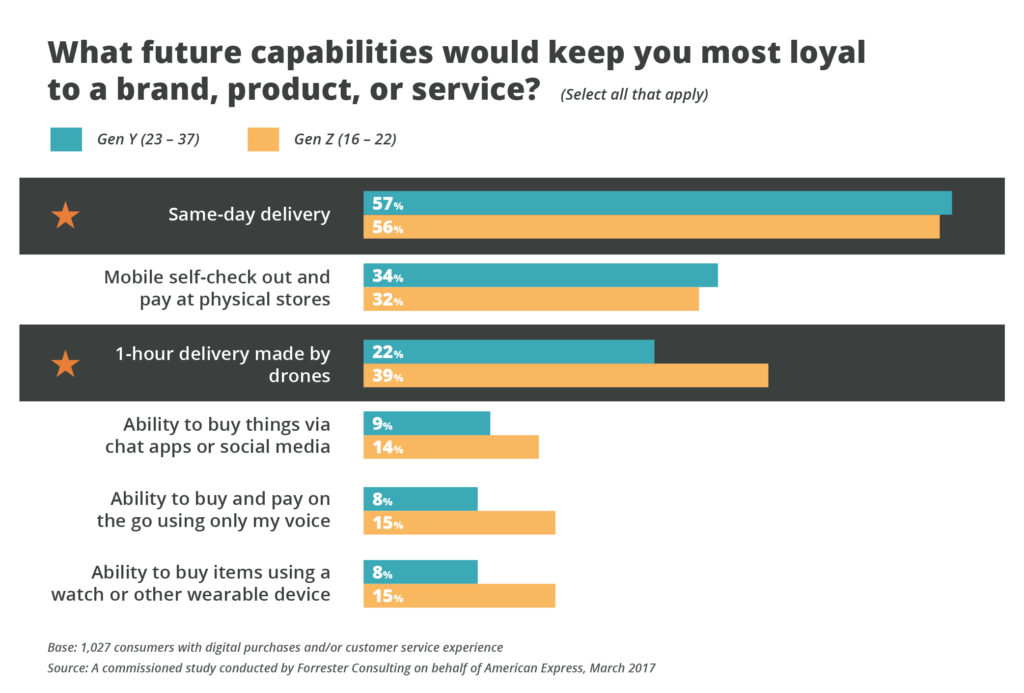 Taking on the Competition

Target’s strategy is also a direct challenge to two of its biggest rivals. Both Amazon and Walmart made significant strides towards improving their pickup and delivery capabilities in 2017, including:

The acquisition of Shipt is a major milestone in Target’s strategy to improve its digital and last mile capabilities, and it marks the end of a year in which rivals Amazon and Walmart have dominated the news cycle.

While Target has made leaps and bounds in 2017, it will have to continue to innovate alongside these and other retailers in order to remain competitive and capture increased market share moving forward.

What big changes do you think Target will make in 2018?