5 Secrets That All CPG Brands Need to Know About Amazon

Amazon is the future of retail. This is not an overstatement. It is not an exaggeration. It is the truth. Even so, many CPG firms still don’t have a dedicated Amazon strategy. The reason? They don’t believe Amazon is imperative to the future success of their company.

Over the next few years, then, it will become an absolute necessity for CPG companies to work with Amazon.

Below, we will explore why Amazon is important today, how important they will become in the future, and guide CPG companies to build a perfect Amazon strategy.

Amazon is not your enemy.

If you’re a CPG manufacturer, Amazon is not your best friend. They aren’t even a particularly helpful partner. To be fair to Amazon, though, they don’t pretend to be. Amazon cares about the customer first. Since 1995, their vision has been “to be earth’s most customer-centric company.”

They aren’t secretive about their goals, either. One of their core competencies is using technology to drive premium prices down. Those premiums are the industry-standard margins that CPG firms have come to expect over the past 25 years. Amazon is going to cut into these margins by the very nature of their business model.

While Amazon is cutting into margins, they aren’t going to be particularly nice about it. They certainly won’t negotiate. Jeff Bezos has even stated very bluntly, “Your margin is my opportunity.”

Because of this, CPG companies must be willing to accept lower margins in the short term in exchange for the future increased scale that can be achieved with Amazon. Growth in most CPG categories has been in the low single digits for the past decade. Amazon is the best opportunity to generate new growth.

If Amazon doesn’t care about your brand, then why should you care about them? The top reason is that Amazon is bigger than you think.

As explained on a recent episode of the Retailgeek podcast, most analysts equate Amazon’s size with the number they report on quarterly earnings calls. In Q4 2017, Amazon reported $55 billion in revenue.

This number is flawed, however, since Amazon is only able to report 10% of any sales made through Amazon Marketplace (third party) due to accounting rules. Amazon’s reported $8 billion in Q4 2017 sales from third-party sellers therefore represents $80 billion in lost sales for other retailers and missed opportunity for manufacturers.

Extrapolated to an annual number, this means that Amazon is responsible for $480 billion in sales for a one-year period. At $480 billion, Amazon is nearly the same size as Walmart at $500.3 billion. Amazon is also growing rapidly, while Walmart is stuck at 3% growth per year.

It is only a short matter of time before CPG companies will be forced to contribute as many resources to Amazon as they do to Walmart.

Unlimited shelf space on Amazon is a myth.

If you search for batteries on Amazon today, there are over 500,000 results. The options are nearly endless. Customers would be overwhelmed if they had to pick from that many choices at a physical store.

But Amazon boasts the best of both worlds. They can offer consumers a plethora of options while also using their sophisticated algorithm to surface the best products first, making it easier for shoppers to browse their expanded selection.

When it comes to batteries, for example, the first page of search results shows 20 options. That seems much more manageable as a consumer. Fourteen of the results are Amazon’s own brand, and six are Energizer. Duracell, Rayovac, ACDelco, Maxell, Eveready, Medline, AMVolt, Polaroid and more are also available, but they don’t appear on the first page.

Herein lies the problem for CPG companies that don’t have an Amazon strategy: They will get pushed to search results pages where consumers are unlikely to find them.

It would be easier to attain greater visibility if consumers searched for your brand by name, but that is increasingly uncommon. L2, a digital research firm, reports that fewer and fewer search queries “contain a brand prefix or modifier.” 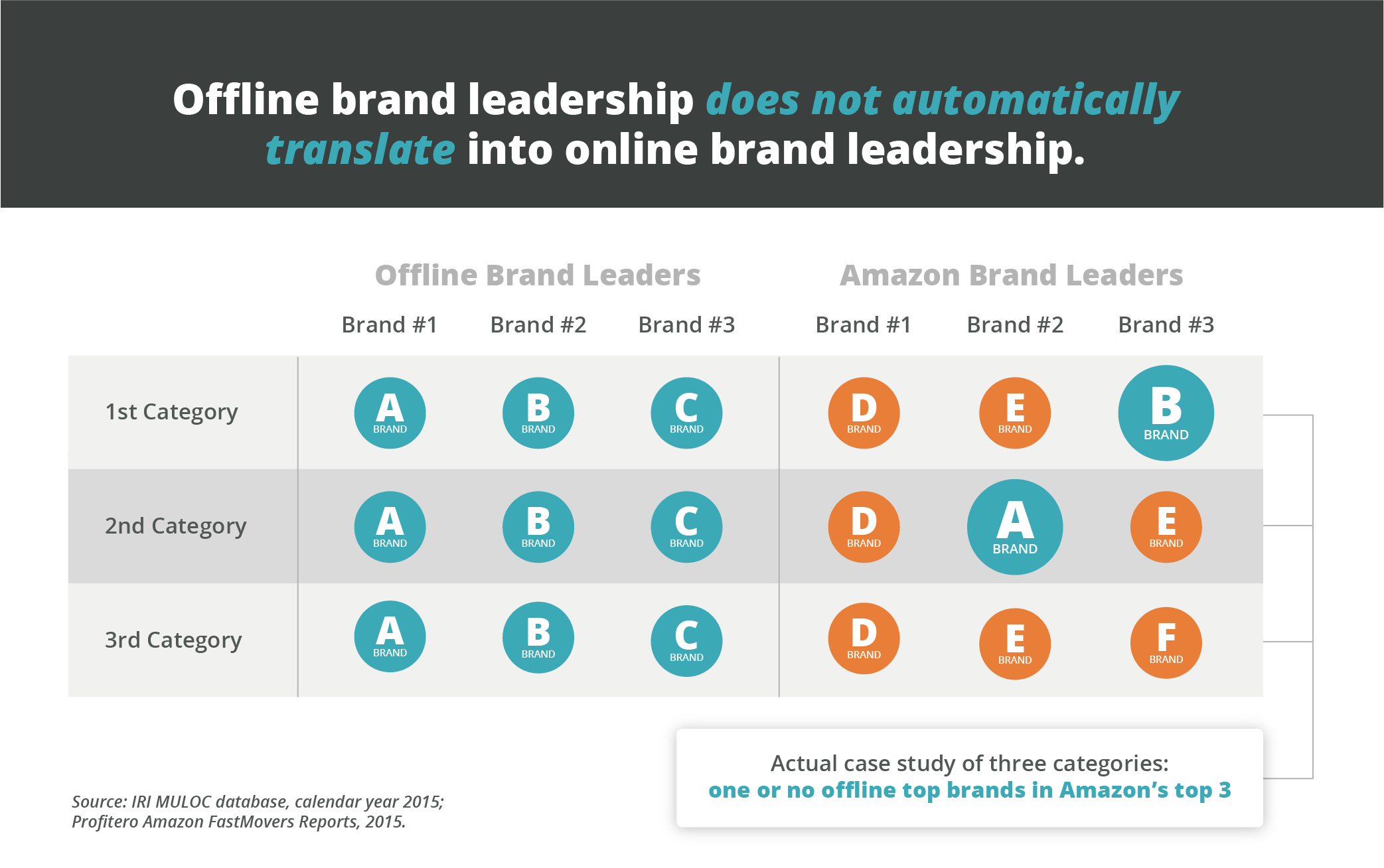 You have the opportunity to win.

Many brands feel like Amazon isn’t interested in working with them and are only out to help themselves. This is only half correct. Amazon is out to help their customers, and then in turn they can help themselves. It isn’t a competition between brands and Amazon; it’s a competition between brands and consumers. Amazon just happens to benefit from the friction and cost-efficiencies that are created in the middle.

As a result, Amazon doesn’t feel like they have to work with every Big CPG company to win, even the P&Gs and Unilevers of the world. If they aren’t getting what they want from these brands, they will replace them with others or create their own.

Amazon’s own brands are strong in many categories. But that doesn’t mean that Amazon doesn’t have any gaps. Some of these gaps are incredibly wide and deep, especially in Food categories. Outside of Whole Foods, Amazon does not have a fully developed food brand.

GlobalData asked consumers how they would feel about Amazon developing its own food brand, similar to AmazonBasics. Amazon scored relatively well on value for money but scored poorly across all other attributes. 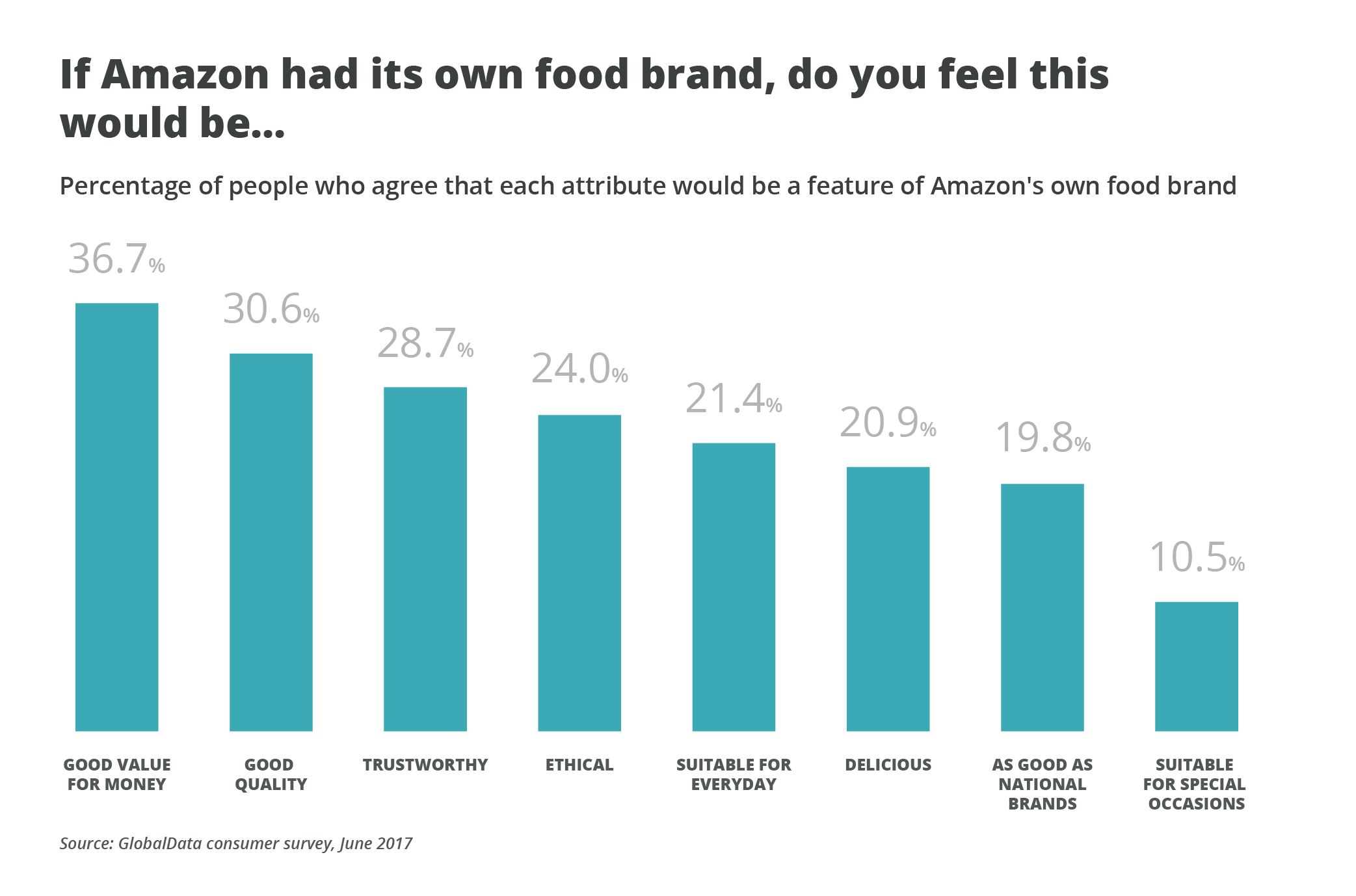 This is where a significant opportunity exists for major CPG companies. When it comes to buying food online, consumers are more likely to choose national brands, according to research from GlobalData. This provides an advantage for any large CPG brand and helps level the playing field against Amazon’s own future brands or Whole Foods’ private-label offerings. 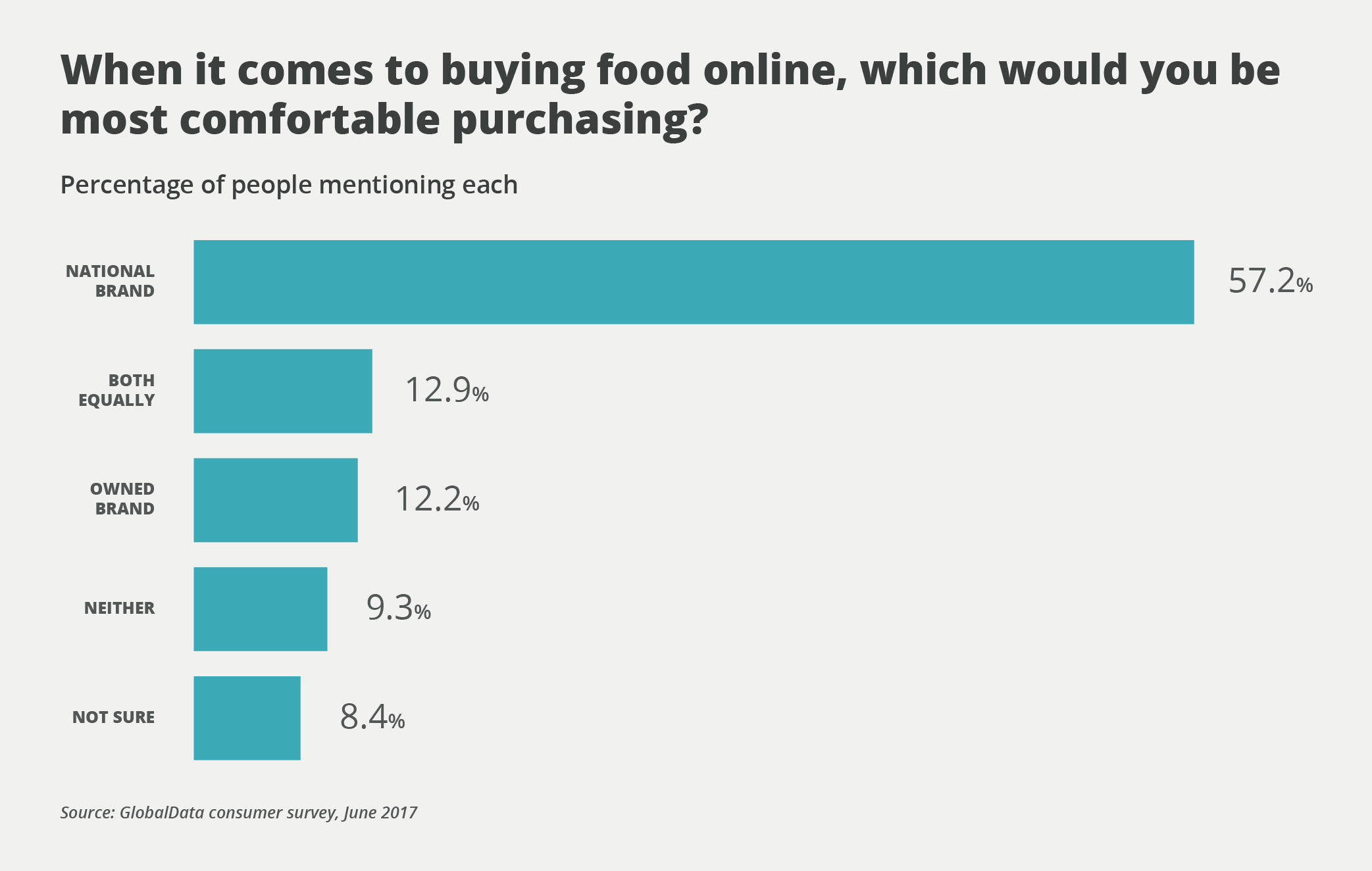 How to work with Amazon

Now that you understand why Amazon is essential, what are you supposed to do about it?

1) One of the main ways to maintain favor with Amazon is to focus on the total contribution of household spending. Boost sales of your most profitable items. Promote those items. Keep the comparative cost of your products down.

This may mean that you don’t sell every single version of your product on Amazon. Soon, it will also mean that you should produce products specifically with Amazon in mind.

2) Stay up to date with Amazon’s ever-evolving trends and requirements. Be aware that whatever you are doing today may change tomorrow. Amazon continually disrupts the retail industry, and even disrupts their own business models to create a better customer experience.

Remember: Don’t try to change Amazon. You need to adapt to them.

3) It is nearly a necessity for any mid-tier to major CPG company to invest in Amazon’s Strategic Vendor Services. This assures that you have an internal vendor manager from Amazon, which is the closest thing to a trusted partnership that you can develop. It will not solve all of your problems. It costs money. However, it is worth it to set yourself up for success.

This doesn’t mean you can rely 100% on your partnership with Amazon. As soon as your product is more expensive than a competitor’s, the Amazon algorithm is going to move you off the top of the search results page. Amazon’s technology will always override any human relationship.

Remember: Partnerships with Amazon are not the same as those with traditional brick-and-mortar grocers. Never forget that the algorithm always wins.

4) To mitigate this, you need a dedicated internal team that regularly assesses what Amazon’s goals are and what that means for your products. Amazon is its own unique sales channel. Brands therefore need to dedicate the same resources to it as they would to one of their traditional channel teams.

This dedicated team is imperative, because the strategies that worked within the four walls of a grocery store do not work with Amazon.

Remember: Amazon focuses on their customer first. If you focus on your customer, you will be more closely aligned with Amazon.

Working with Amazon takes a change in mindset, resource allocation, and an incredible amount of patience. It won’t be easy, but their importance is not going to decrease anytime soon.