CPG Mergers & Acquisitions We Could See This Year

The CPG industry is in the midst of a dramatic transformation. Consumer preferences are shifting to healthy food, niche brands and unique products. The barrier to entry for CPG companies is lower than ever before. Exciting young startups are more than happy to feed the new shopper’s insatiable appetite for creativity and innovation.

At the same time, incumbents are struggling to perform and please their investors. 15 CEOs have been forced out of major packaged food companies since the start of 2016, including Kellogg’s, General Mills, Mondelez and Hershey.

Making predictions about the future of the industry is a daunting task. With mergers and acquisitions on the rise, let’s explore which companies are likely to broker a deal in 2018.

Look to the Past to Predict the Future

A short analysis of global CPG investment activity helps us point our finger in the direction of the activity that is on the horizon.

Incumbent CPG companies engage in three traditional investment areas to grow and increase sales yearly: mergers and acquisitions, venture capital, and private equity. The CPG industry has shown a strong preference for focusing on M&A. According to GlobalData, M&A has historically been the preferred investment area, accounting for 86% of total transactions in Q4 2018 ($4.5 billion) and 80% in Q1 2018 ($3.2 billion).

Food categories have been the most active in M&A, responsible for 78% of M&A activity in Q4 2017 and increasing to 97% of all M&A deals during Q1 2018. Busy consumers have a growing demand for easy-to-use packaged food, which has driven growth in the food industry. Combined with increasing urbanization, investment has been pushed forward, specifically in food categories.

North America is the most active region for M&A. It was responsible for 58% of M&A in Q4 2017 and 92% in Q1 2018. This is attributed to the region’s healthy economy, positive economic indicators, and a projected rise in manufacturing.

Lastly, it is helpful to understand if we should look for high value within mature organizations or low-value acquisitions. The CPG industry has actively engaged in high-value transactions. Deals over $500 million accounted for 72% of M&A in Q4 2017 and increased to 90% during Q1 2018.

With a blueprint of where to look for M&A, what organizations might be ripe for activity?

Ferrero, the confectionary company responsible for Tic Tacs, Nutella and Ferrero Rocher, completed one of the most significant acquisitions in the past year, purchasing Nestlé’s U.S. Confectionery business for $2.8 billion. The Nestlé acquisition enables Ferrero to strengthen its presence in the United States with broader offerings.

Next, Ferrero needs to broaden its product line to focus on health food and snacks. According to GlobalData, 62% of consumers globally say they are influenced by a product’s impact on their health and well-being when choosing food. To stay relevant to today’s health-conscious consumers, confectionery manufacturers must respond to the demand for “healthy” food. Ferrero has never launched a non-confectionary product from within its organization, so it will likely look outward to acquire brands and employee expertise.

Hershey and Ferrero have been competitors in grocery store aisles for years, but now they will be competing to acquire healthy snack food startups.

Hershey has completed seven acquisitions since 2011 and recently bought Amplify Snack Brands, the maker of SkinnyPop, for $1.6 billion. These non-confectionary acquisitions strengthen Hershey’s market presence and also will significantly expand its product portfolio. In turn, this leads to improved market penetration for the organization.

Hershey’s CFO specifically stated that it is looking for businesses with “strong revenue growth in the $100 billion snack wheel.” Top targets for Hershey and Ferrero include Awake Chocolate, Raw Indulgence, Honey Stinger, Young Plantations and BumbleBar. 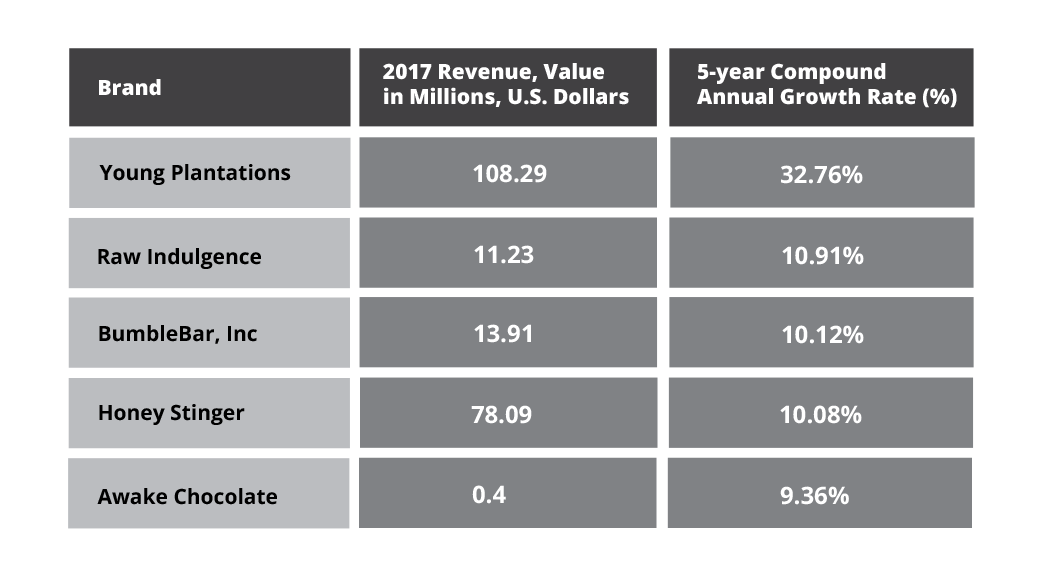 Campbell’s: Acquire or Be Acquired

Two types of CPG companies are thriving in the current economic climate:

That leaves the companies in the middle, such as Hormel Foods, Smucker’s and Campbell’s Soup, in an awkward position. They aren’t able to innovate as effectively as young, small, nimble startups. Yet they can’t yield the financial benefit of a top-tier CPG firm.

Campbell’s has made a valiant effort in recent years to solve both of these issues by acquiring six significant companies since 2012, including Bolthouse Farms, Pacific Foods, Plum Organics and Snyder’s-Lance. These acquisitions allow the firm to bring new categories into the Campbell’s family and bring innovation from these startups in-house. Meanwhile, the acquisitions are also increasing Campbell’s overall size, allowing them to increase volumes. Campbell’s should double-down on this strategy in 2018.

However, if Campbell’s fails to make an acquisition that allows it to reach the size of Kellogg’s, Tyson or General Mills, it will likely begin to sell off some of its underperforming brands and prepare to be acquired itself. There have been rumors that Kraft Heinz has attempted to purchase Campbell’s in the past, but Campbell’s has declined. Campbell’s is now at an inflection point where it must eat or be eaten.

P&G: The Rich Get Richer

Procter & Gamble is the largest CPG company in the world. It has divested about 100 of its underperforming brands since 2014 and has not made a significant acquisition since it acquired Gillette in 2005.

Acquisitions have begun again, however, with natural brands Native deodorant in November 2017 and Snowberry Skin Care in February 2018. Then in April, it acquired Merck’s consumer business for $4.21 billion.

Now, it is under pressure from its activist investor Nelson Peltz to acquire smaller, niche brands, which he thinks represent the future of the consumer business.

Expect P&G to acquire small to midsize brands that produce natural and organic products in the Personal Care space. The company would be smart to pick up niche brands in the direct-to-consumer space, including Hims for men’s health, quip for oral care, LOLA for feminine care, Curology for skincare, and hush for cosmetics.

The storied history of the packaged food industry has hit an inflection point. There is one absolute fact that we can be sure of over the next year: there will be an incredible amount of change. There are shakeups on the horizon, specifically a wave of mergers and acquisitions over the ensuing year. Look for the largest companies to purchase small startups or mid-tier companies. Mid-tier companies will try to fend off advances by increasing their size, merging with competitors, or making acquisitions of their own. The landscape in 2019 will certainly look much different than it looks today.