Starbucks & Nestlé: Should All CPGs Be Licensing?

Nestlé has announced that it will pay Starbucks for the rights to market, sell and distribute the chain’s packaged coffees around the world. Analysts and investors are cautiously excited. At the same time, many CPG companies are wondering if becoming a licensor or licensing a brand is a step they should be taking.

Starbucks and Nestlé aren’t the first companies to engage in a licensing deal, but licensing isn’t as prevalent in the industry as it should be. This industry-changing deal should be a reminder to all CPG executives that licensing is an incredible opportunity to partner with allies and even competitors to create a mutually beneficial agreement.

As Rich as a Frappuccino

Starbucks sold $2 billion in packaged coffee and tea last year. The company asked Nestlé for 3.6 times that amount – $7.15 billion. This multiple is a bit higher than the ordinary industry average of three times the previous year’s sales. However, Starbucks is one of the most recognizable brand names across North America and Europe, so a bit of a premium is expected, which places Nestlé in a stable position to make its investment back in a few short years.

To put Starbucks packaged coffee and tea sales into perspective, Kraft-Heinz sold $2.2 billion in condiments last year, and Pabst Brewing Co. sold $1.8 billion in beer, according to GlobalData. $2 billion is a massive amount of revenue for a CPG category. Few CPG organizations in the world have a brand and product as strong as Starbucks that they are willing to part with. Starbucks generated $22.4 billion in total revenue during 2017, so its $2 billion in packaged coffee and tea isn’t insignificant, but it also isn’t a remarkable portion of its overall business.

There are even fewer companies as large as Nestlé that would be able to acquire the rights to distribute that brand. Nestlé’s revenue in 2017 came in just under $89.9 billion, making this acquisition feasible for the world’s largest food and beverage company.

The size of the Starbucks/Nestlé licensing agreement is unique. However, the structure is not. Many CPG companies have been benefiting from licensing and distribution deals for years.

Every great CEO knows that they need to diversify their revenue streams to draw in customers who wouldn’t typically interact with their brand. The more revenue streams a company has, the more likely it is that the business will succeed as inevitable changes take place in the marketplace. Walmart and Kroger were responsible for over 23% of Food and Grocery sales in the United States in 2017. Thus, every CPG company makes sure those retailers are happy. On the other hand, these companies are continually finding ways to decrease their reliance on top retailers. Most CPG companies have hopped on board to the meteoric rise of Dollar General. They have optimized their products to sell them in convenience stores and ship them via e-commerce.

Outside of new sales channels, one of the simplest industry secrets to diversify revenue streams and extend the product line is to license a brand to other companies. Many CPG companies license the names of their CPG associates. Unilever’s Ice Cream division licenses the Reese’s brand name from Hershey, Oreo from Mondelez, and M&Ms from Mars, for example. Often, a well-known brand name listed on the front of the package in a grocery store is juxtaposed with a recognizable yet entirely different company name after the “manufactured by” text on the back. 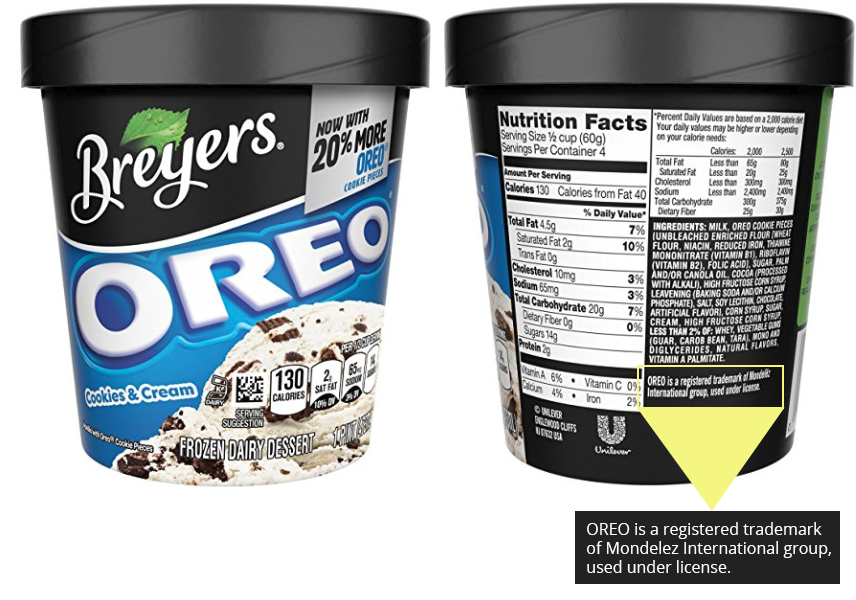 To be successful, each licensing arrangement should be an extension of the initial product, regardless of whether you’re the licensor or licensee. There must be a clear and unique selling point that extends the original brand but doesn’t directly conflict with it. This is difficult to balance but is mutually beneficial when executed accurately.

Producing a new product or entering a new category is tricky. A CPG company with a significant brand presence can remove all of the financial risk of entering a new category by licensing out the brand name to another manufacturer. The licensor receives upfront revenue for the rights to use the brand’s name and logo. It also gets royalties for the success of the products that are sold. Nearly all financial risk is mitigated for the licensor since the licensee is responsible for producing and selling the product. The rewards are much smaller for the licensor, but there is minimal direct effort on its part.

With all of those benefits to the original brand, the licensee seems like it’s getting the short end of the stick. However, building a brand from scratch is incredibly difficult. New CPG products fail early and often, with Nielsen reporting that 85% of new CPG products fail. Without a recognizable brand name, that rate will only get worse. Although the manufacturer only receives one notable benefit, that benefit is often the difference between success and failure.

According to License Global, 29 of the top 150 licensors are consumable product companies, including General Mills, Coca-Cola and Anheuser-Busch InBev. Although Starbucks didn’t crack the top 150 last year, it will almost certainly jump straight into the top 35 after the Nestlé agreement.

Procter & Gamble is the largest consumer goods company in the world. It is also the most prominent licensor of its own brands, at #22 on the top global licensors list. Its licensed brands generated an estimated $3 billion in sales during 2017, mainly from Febreze, Vicks, Braun and Mr. Clean.

Some CPG firms are both licensors and licensees. Reynolds Consumer Products owns the Hefty brand, a top brand in trash bags and trash cans. It licenses out the Hefty brand name to wastebasket producers and home storage solutions that Reynolds would be unlikely to produce on its own.

On the other hand, Hefty licenses Church & Dwight’s Arm & Hammer brand to use as a secondary brand name on its own trash bags. This adds additional brand credibility, making customers feel like the trash bags aren’t just durable but also fresh. Reynolds has seen yearly sales increases from Hefty Ultra Strong since adding Arm & Hammer branding across the full product line of trash bags. 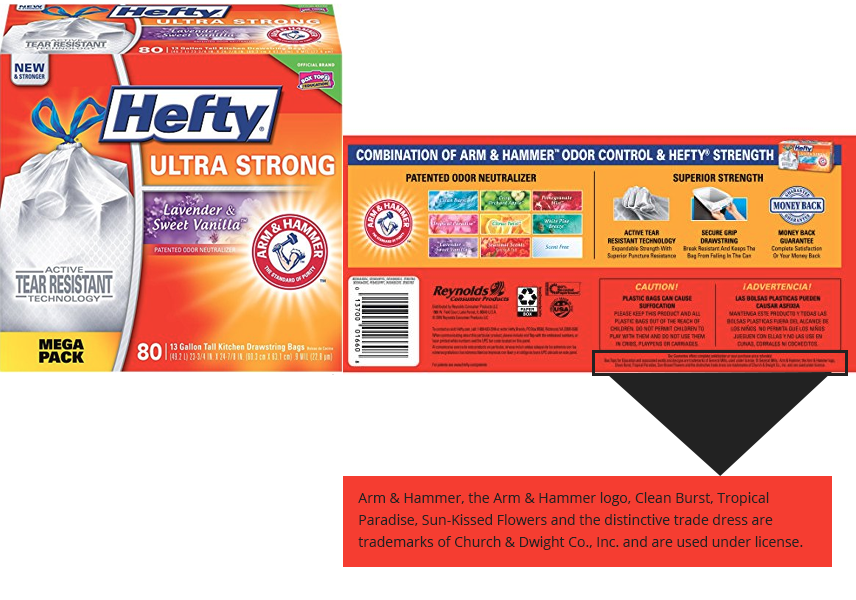 One of the most interesting licensors is Sunkist who “has over 50 licensees in 80 countries, with more than 700 SKUs.” It licenses the Sunkist brand to juices, soda, tea, water, snacks, nuts, confectionery, ice cream, vitamins, supplements and more. The brand works with over a dozen partners, one of which is Nestlé.

The Starbucks and Nestlé licensing agreement has raised many eyebrows, but it shouldn’t be a complete surprise. Starbucks has always focused on its coffee shops and delegated the packaged goods portion of the business to other companies, starting with Kraft Foods in 1998 and then switching to Acosta in 2011. It sold off its Tazo Tea brand to Unilever in November 2017.

This strategy is sensible, as it frees up Starbucks to focus on the core of its business. Starbucks plans to open up 1,000 upscale Starbucks Reserve stores along with 30 Reserve Roastery emporiums to keep up to speed with the restaurant segment that it perfected in the 1990s.

The Starbucks brand has continued to grow in recent years by focusing on storytelling, inspiring the human spirit, and perfecting the experience of drinking coffee. These qualities are difficult to inject into a packaged product at a grocer in Poland, Malaysia or South Africa – all countries where Nestlé has distribution but Starbucks does not. There is still money to be made by selling packaged products on the store shelf, which Nestlé is keen to capitalize on. But Starbucks seems to be doubling down on the experience within its coffee shops, since that is the core product it can control most effectively.

CPG sales is a low-margin business that yields the best returns when there are incredibly high volumes. Nestlé has this business down to a science. Coffee shop sales can lead to a very high-margin business if operated appropriately. Starbucks can focus all of its efforts on its 28,000 stores around the world while still receiving a $7.12 billion windfall.

Beyond those benefits, Starbucks gets added brand recognition outside of North America and Europe, where Nestlé has a strong distribution presence but Starbucks does not. This opens the window for Starbucks to continue its global expansion as Nestlé’s distribution creates brand-aware Starbucks consumers. It is an admirably fluid partnership, with Starbucks building the original brand, Nestlé bringing the brand to new markets, and Starbucks opening shops deeper within countries on the back of Nestlé’s distribution.

According to GlobalData, Nestlé sold over $1 million worth of product last year in 78 different countries. Starbucks eclipsed $1 million for packaged product sales in 24 countries. Distribution portrays an even more dramatic difference, with 93% of Starbucks’ packaged product sales coming from the United States. Nestlé’s distribution is much more consistent globally, with 34% in the United States.

Nestlé’s broad distribution is a double-edged sword. The company was late to enter the coffee category and faces continued threats within the market. The United States is the most crucial coffee market in terms of revenue, and this deal will help Nestlé increase its sales in the United States.

Additionally, Nestlé should see $2 billion in revenue for Starbucks products next year and hopes to significantly increase that number in the years to come. The company should be able to realize $7.12 billion in revenue within three to four years. With the growth of the coffee industry, and increased distribution from Nestlé, this deal could look like a bargain in a few years’ time.

The size of the Starbucks/Nestlé deal has brought CPG licensing into the mainstream. All CPG companies should see that regardless of size, they can engage in licensing deals of their own. They can extend their brands to categories that they don’t currently manufacture while increasing brand awareness and making easy cash. Manufacturers can create new product extensions and decrease their risk of new product failure by partnering with a well-known brand that speaks to the consumer.

If appropriately managed, Nestlé and Starbucks should both see exponential benefits from this well-crafted partnership over the years to come. The more prominent lesson is that any CPG firm can use these same tenants to diversity and benefit their own organization.