4 Lessons CPG Companies Can Learn From the U.K. Grocery Market

There is little doubt that the U.S. grocery market is in a state of flux. The rise of online ordering, dramatic shifts in shopping habits and preferences, an increase in dining out, and the rise of niche sectors like meal kits are all conspiring to create far-reaching and deep-seated change. The key questions are how will this change reshape the sector, and what will it mean for CPG companies?

Forecasting the future can be a challenging task, but fortunately, in the case of U.S. grocery, predictions can be made by looking at the United Kingdom – a market that has been through similar challenges. Indeed, the U.K. grocery market is arguably much further ahead of the United States in terms of its development – largely thanks to consolidation, competitive pressures, and a much higher level of online ordering.

At the outset, it is important to recognize that the U.K. and U.S. grocery markets are not identical. In the United States, chains are more regional, and competition is more fragmented; by contrast, the United Kingdom is a consolidated market where national chains dominate the grocery landscape. Consumer habits are also different: Americans eat out far more than their British counterparts, and in the States, takeout is a much more significant part of the food landscape. The real estate situation is different too, with store costs being much higher in the United Kingdom due to rents and property taxes.

Despite this, the markets are on a similar trajectory in terms of key trends. Both are seeing strong growth of online grocery ordering. Both have witnessed consumers switch from infrequent, large shopping sprees to more frequent, smaller top-up shops. And both have seen the rise of deep discounters such as Aldi and Lidl. 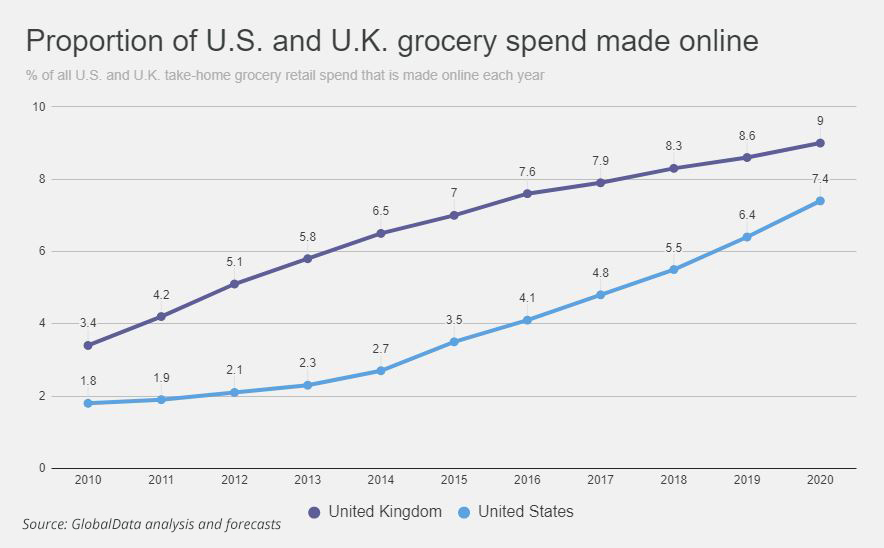 When it comes to the impact of deep discounters, the United Kingdom also leads the way. This year, discounters will collectively account for 13.2% of all U.K. grocery sales. Comparatively, although they are a fast-growing segment of the market, deep discounters – including dollar stores – account for just 5.8% of the U.S. grocery market. 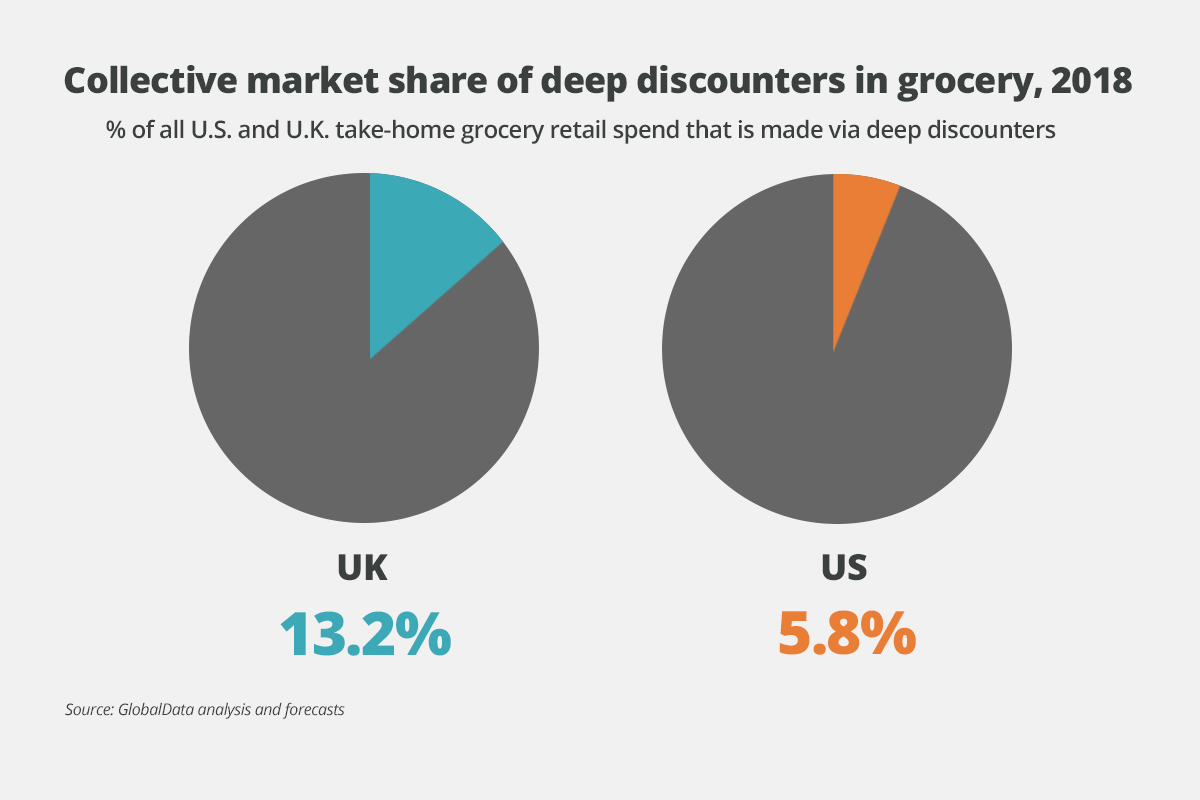 These trends, along with the shift in the way people shop, have had a dramatic impact on the U.K. grocery sector. They have brought about four main changes that can be used as a template to understand what might materialize in the United States.

The rise of deep discounters has created a consumer agenda focused around low prices and value for money. No U.K. grocer, not even premium players like Waitrose or Marks & Spencer, has been immune from this trend. Indeed, there is a clear positive association between a lower price proposition and annual growth rates. 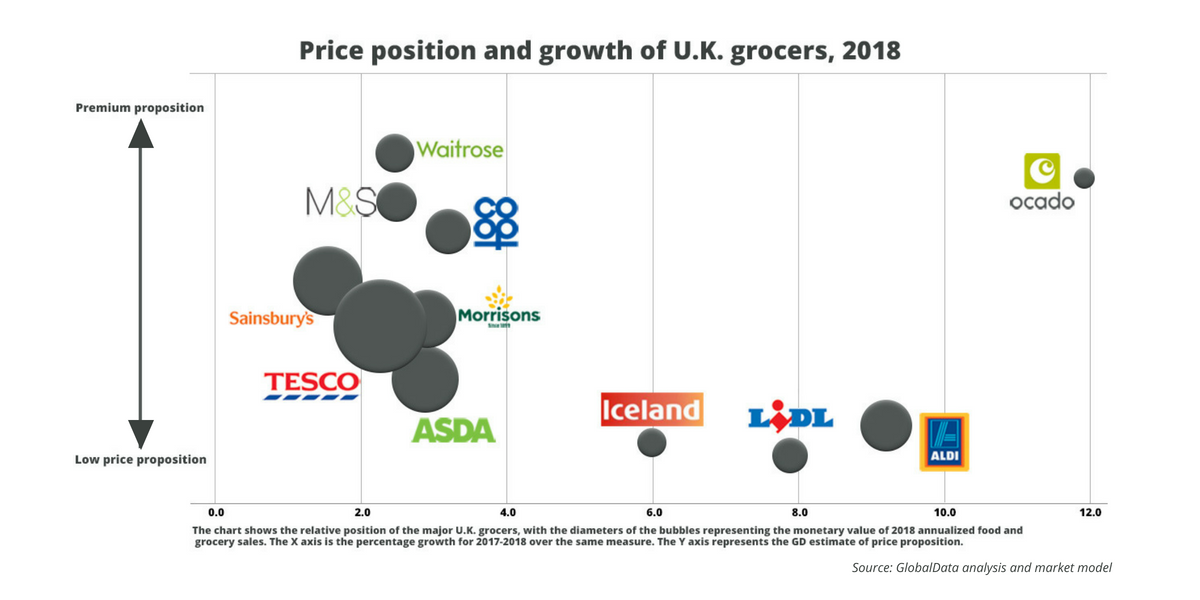 As a result, all players have had to invest in lower prices and/or in creating or enhancing entry-level ranges. As necessary as this is protect sales, it has damaged retail margins.

There have been several implications for CPG firms. Foremost among them is a further push to own-label brands, which is the vehicle most supermarkets prefer to use for entry-price products. The desire to keep prices low has also led to increased skirmishes between CPG firms and retailers, such as Tesco’s temporary delisting of Unilever’s Marmite brand when the latter tried to push up prices.

A similar drive to lower prices is underway in the United States, and pressure on suppliers is already increasing, especially from big chains like Walmart.

In response to the rise of online, most big U.K. grocers are investing heavily in digital systems, infrastructure and propositions, even though, in many cases, online is an unprofitable way of serving the customer. The rationale is that without such investments, sales and market share will be lost, which will, in and of itself, erode profits.

The investments mean that the online grocery market has become more consolidated. Smaller players have found it more difficult to provide a viable online proposition to customers, weighed down by the cost of offering delivery services against decreasing basket sizes. 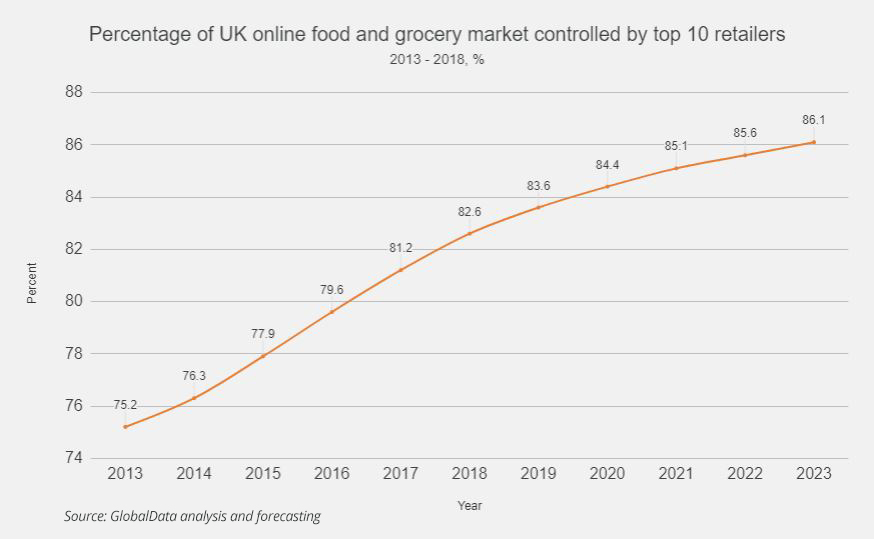 This trend has two main consequences for CPG players. First, in the digital space, there are now fewer players to do business with, increasing reliance on the big grocers as a distribution channel. Second, the erosion in profit caused by online investment has added further impetus to the push to reduce supplier costs.

The United States is at a much earlier stage of online development, but the trend is playing out in a similar way. Grocery giants like Walmart are stepping up online expenditure, and Kroger has invested in the technology of Ocado, a U.K. online grocery player. In both cases, the bottom line is under pressure.

As consumer demand for convenience continues to rise, and shopping frequency increases from weekly to daily shops, U.K. supermarkets are shifting their portfolio focus to convenience over larger one-stop shops. The largest grocers, Tesco and Sainsbury’s, are already undergoing such a change, reducing their average store size by 5.6% and 15.2% respectively since 2013.

The United Kingdom is arguably way more advanced than the United States in having a more flexible approach to store development. The vast majority of supermarkets operate a variety of different formats, from large hypermarkets down to small urban concepts, to cater to consumer needs in different locations.

Although it is a long way behind the curve, the United States is gradually moving to a more flexible store approach. For example, Target’s new small formats have been a success in urban areas, and Amazon is looking to roll out its convenience-focused Amazon Go concept to more markets. Other grocers will likely look to introduce more store types, and those that don’t will seek to shrink down existing store footprints.

For CPG firms, smaller stores mean that selections need to be edited. Retailers, therefore, must delist certain products or brands. Even big brands have suffered, with, for example, the U.K.’s Tesco cutting out some Heineken products. For CPG firms, ensuring products are relevant and in high consumer demand has never been more important.

Pressures on margins and prices have led to further consolidation, even in an already concentrated market like the United Kingdom. This consolidation has taken three forms.

As a more fragmented market, the United States is even riper for many of these types of arrangements. Amazon’s takeover of Whole Foods was just the start of heightened merger and acquisition activity. And as various deals progress, CPG companies need to be aware that the market will become more consolidated and buyer power will increase as a result.

While the U.S. grocery landscape is currently challenging for CPG firms, the dynamics at play suggest that things will only become more difficult. As the U.K. market shows, the power of supermarkets and grocers will grow, and this, in turn, will increase the pressure on product manufacturers. Arguably, those that execute the right strategies and relationships with retailers will be able to thrive in a more consolidated market, but those that don’t will lose out.