Today, online grocery is an area of increasing investment and focus for many traditional supermarkets and CPG brands. However, despite its relative underdevelopment compared to other categories sold online, grocery is not new to the internet arena. The sector has a rich and storied history that holds warnings, lessons and predictions for those embarking on their online journeys today.

The late 1990s was a time of great optimism for internet retailers. Consumers had just started ordering products online, and there was a widely held view that this new method of shopping would completely revolutionize the industry.

As the largest single retail sector, grocery was an early area of focus. It potentially offered the lucrative reward of high-spending consumers who shopped regularly. It also had the benefit of being something that many people did not particularly enjoy shopping for and so was crying out for a change that increased convenience and saved consumers time.

Significantly, the early movers in the industry were not supermarkets or food manufacturers, but technology companies keen to use their knowledge of coding and systems to shake up a sector they believed to be ripe for change. They were encouraged and supported by investors who, at this time, were throwing money at any company with a .com suffix.

HomeGrocer.com was one of the first online supermarket players. It started in 1997 in Washington state and quickly obtained investment to allow it to create the infrastructure needed to support the business, including a huge warehouse and a fleet of vans. Early growth was impressive, and by mid-2000, sales had reached over $1 million a day. This rapid growth fueled more investment for expansion into other markets, including California, Oregon, Texas, Georgia and Illinois.

The other early mover in online grocery was Webvan, founded in 1996. After a successful launch in California, the firm embarked on aggressive expansion plans, with a goal to operate in 26 major cities around the United States. Its confidence in the future of online grocery was underlined by an astonishing $1 billion order with an engineering and construction firm to build out new warehouses and the infrastructure to support them.

Despite the exuberance of early pure-play grocery retailers, their fate was not a happy one. When the dot.com bubble burst, investment quickly dried up and starved companies of much-needed cash. HomeGrocer.com, which was losing money, sold up to Webvan in September 2000. In turn, Webvan filed for bankruptcy in July 2001 (the brand was later bought by Amazon).

While the dot.com crash quickened the demise of the early online grocers, it was a symptom rather than the primary cause of failure. In short, the market had been too quick to invest in online business models that were unproven and based on hype rather than reality. In the case of Webvan, HomeGrocer.com and several other grocery tech startups, there were several shortcomings.

First, the companies ignored the fact that while the grocery sector generates high sales, margins are low. This means the return on hefty investments in technology and infrastructure is painfully slow. A very fast pace of expansion, especially in the case of Webvan, had a severe negative impact on balance sheets and ultimately helped make the ventures unsustainable.

Second, the companies overestimated the profitability of online orders. Traditional grocery works financially because the customer puts in most of the effort: coming to the supermarket, picking products from shelves, and taking them home. This offsets relatively low margins. Online home delivery is a completely different model in which the retailer does most of the work. Unfortunately, customers were not willing to pay the real cost of this in delivery and handling fees, so profitability remained elusive.

Third, as with most predictions about online back in the 1990s, the impact was dramatically overestimated. Online never ended up revolutionizing the industry; if anything, it remained a very niche part of the market. Indeed, in 1999, online accounted for just over a tiny 0.09% of all grocery expenditure. The early startups had overestimated the potential size of the prize. 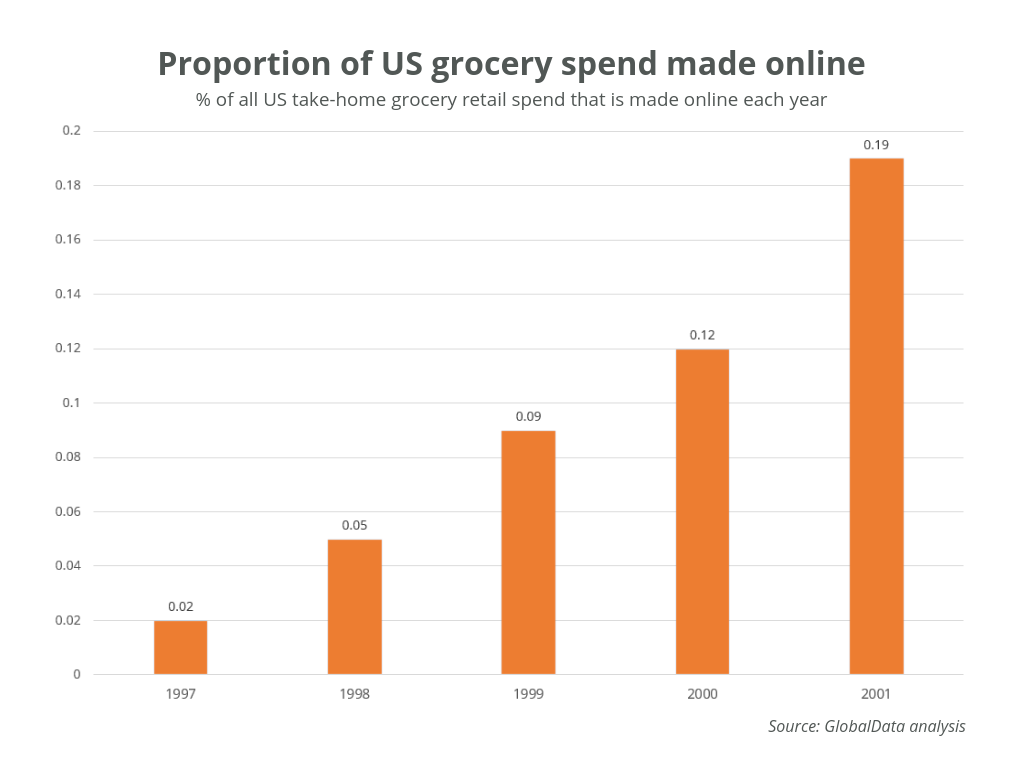 The bottom line was that most early pioneers made massive losses. In its final year of operation, Webvan’s $178.5 million in sales was swamped by its $525.4 million in costs.

At the same time as pure-play technology companies were making moves into grocery, other players were pursuing a different model. Peapod, for example, which was founded in 1989, initially pursued a partnership model by working with traditional supermarkets like Jewel, Kroger and Safeway to deliver food. This, along with cautious expansion, allowed it to save on costs in the supply chain. Despite market turmoil, its survival was ensured when Ahold bought the operation in 2001.

Relative latecomer Instacart, which was founded in 2012, used a similar model to Peapod in that it partnered with grocers. However, unlike Peapod, the operation is more flexible, relying on independent contractors to pick products from supermarkets and deliver them to customers’ homes. This flexibility allows Instacart to avoid many of the high infrastructure costs that proved to be the Achilles’ heel of pure-play online grocers.

The lesson from these models is that using the scale and infrastructure of mainstream grocers is a way to circumvent both the high costs associated with warehousing and the lower margins that come from procuring food for a relatively low-volume operation. In essence, these models underline the fact that, despite the rise of online, big supermarket groups still have a major advantage because of their economies of scale. 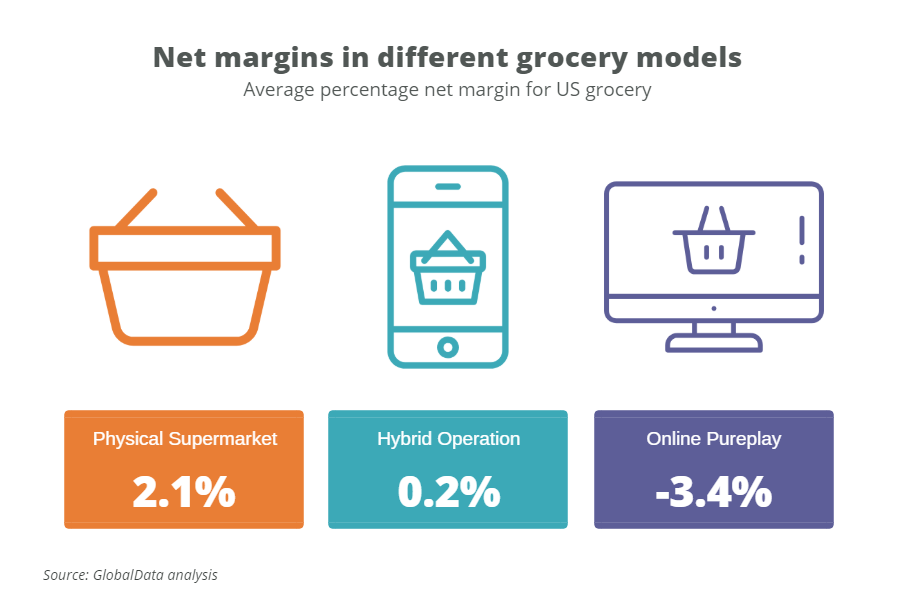 Today, online is once again a battleground for grocery. However, the field is not dominated by technology firms or pure-play online retailers. Rather, it is crowded with traditional grocery chains like Walmart, Kroger, Target and even Amazon-owned Whole Foods.

The arguments that applied to the early pioneers are still relevant and represent issues that grocers are having to work through. However, supermarkets have several strategic advantages that make their ventures into online more likely to generate success.

First, they already have extensive infrastructure and logistics networks, including their stores, which can be used as warehouses and distribution centers for online orders. Second, they have huge economies of scale, which allows them to obtain better margins, which, in turn, means that online profitability, while challenging, is not completely elusive. Third, they are able to appeal to consumers by offering a range of services, like click and collect from stores and curbside pickup, that helps overcome some shopper objections to buying online. 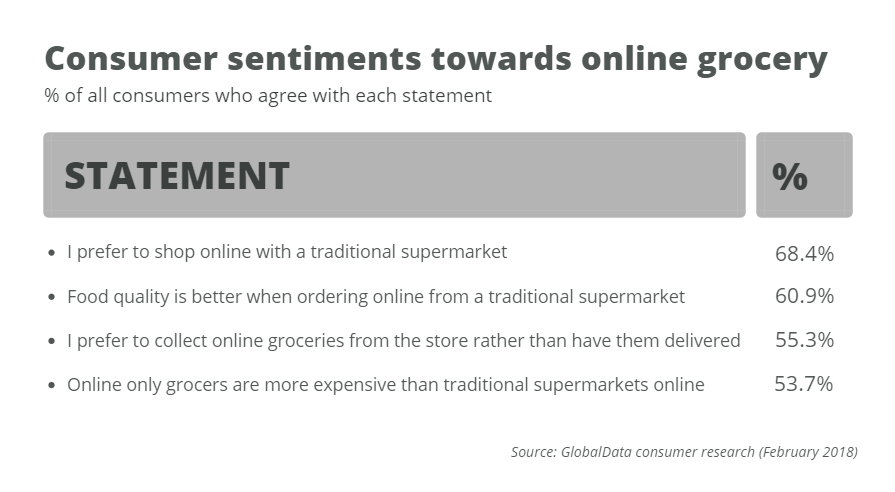 These things, together with the rise of automation and robotics in picking and packing, means that this new wave of online innovation and investment will likely succeed. This is, perhaps, the start of the true internet grocery revolution.