Over the past five years, the U.S. market for cosmetics and toiletries has grown by a robust 17.2%. However, within this, the real success story has been the male personal care and grooming category, where sales have skyrocketed by 26.4%. 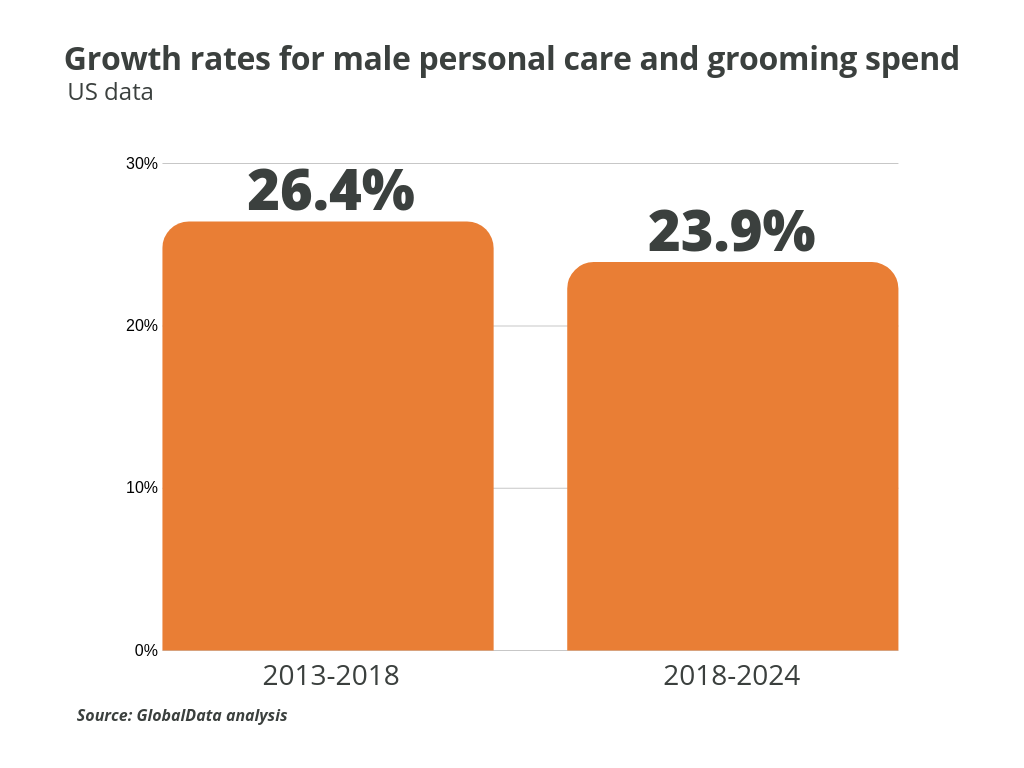 There are a lot of reasons for this growth. Consumer demand is stronger, especially from younger males who are more interested in categories that enhance their appearance, like cosmetics. Retailers and brand owners have also become better at producing ranges targeted at men. And, of course, an aging population profile has created the need for more products that allow men to retain a youthful appearance for longer. 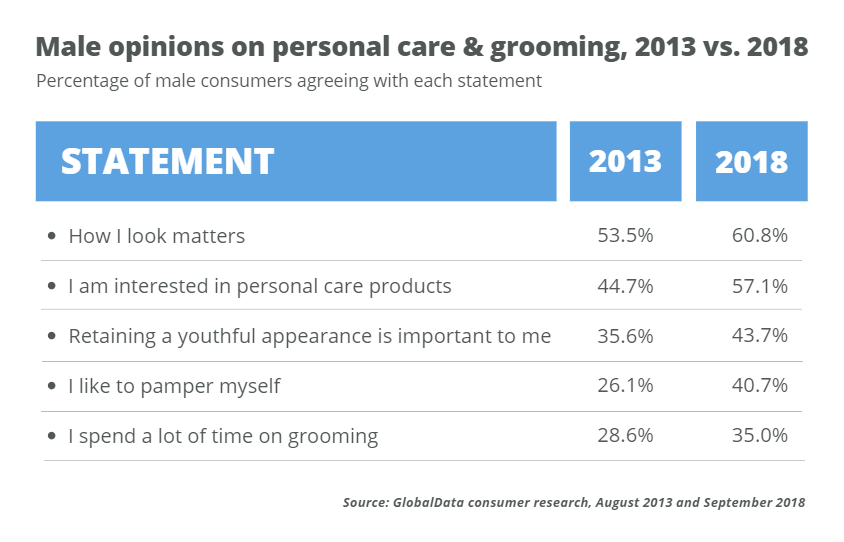 While strong demand creates plenty of opportunities, cashing in on the male beauty market is far from easy. For one thing, men’s shopping habits are different from those of women – something that traditional CPG firms have had to adapt to. This difference has also made the men’s market much more susceptible to digital disruption than is the case for women’s beauty.

While men are now more comfortable consuming personal care and beauty, this has not fully manifested itself in where they like to shop. Even among younger shoppers, there is still a reluctance to visit beauty stores like Ulta and Sephora that are still largely seen as places for women. Instead, men prefer the safer ground of generalists like Walmart and Target as well as drugstores such as CVS and Walgreens. 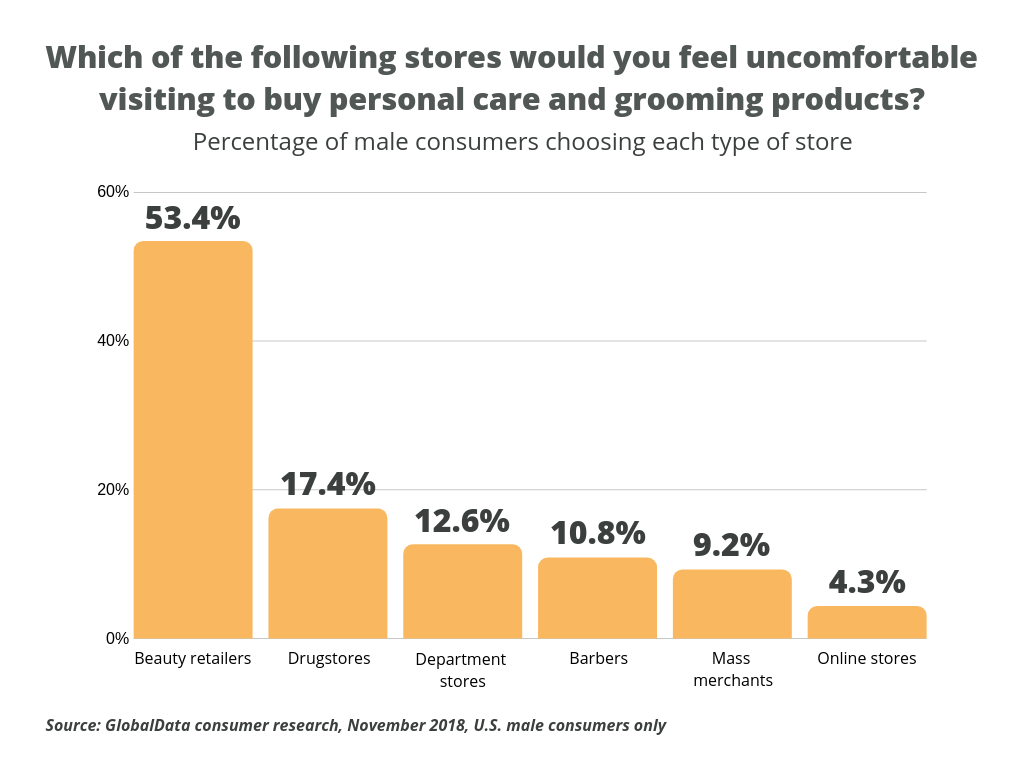 For beauty brands and CPG firms, this creates an issue. These more traditional players are not particularly good at showcasing male beauty products, nor are they adept at selling more premium categories. Even men who shop there find the offers relatively basic and uninspiring. 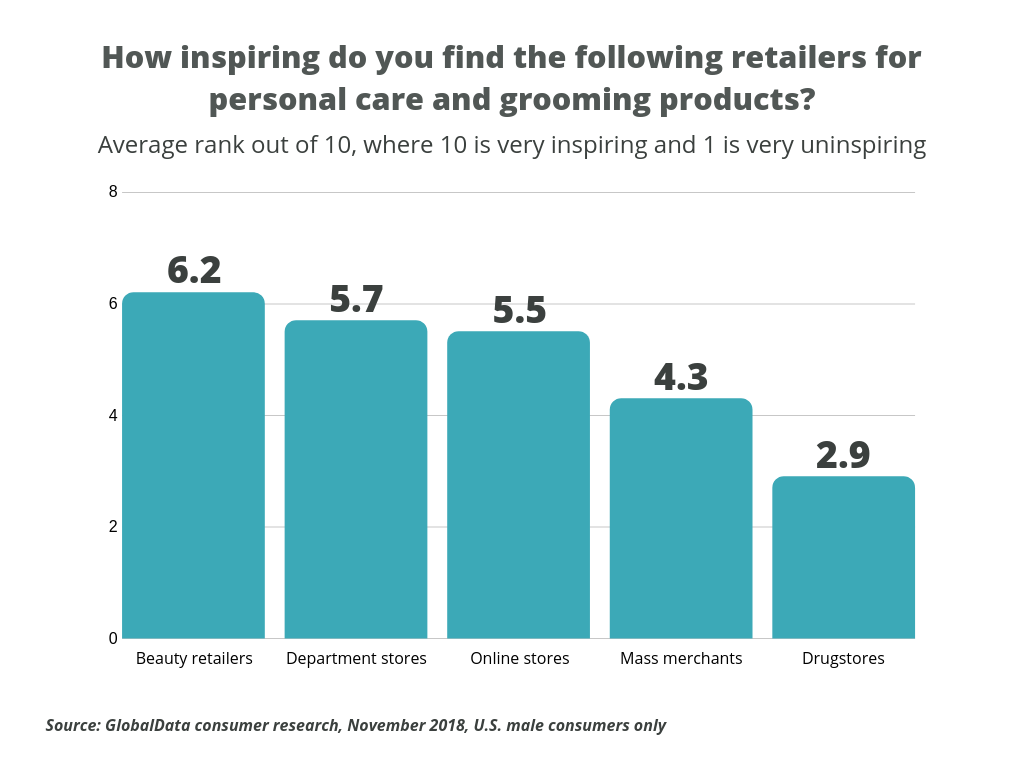 While there have been some attempts to remedy this, such as Target’s revamp of its beauty section and its highlighting of popular brands such as Harry’s, these are relatively small-scale initiatives that lack impact. The problem of the down-at-heel offer at mainstream players is exacerbated by the decline of department stores, which were traditionally a channel for more premium male personal care and grooming products.

The gap in the physical market has largely been filled by niche specialists. Stores like L’Oréal-owned Kiehl’s and L’Occitane have succeeded in building up strong male followings, who are enthusiastic about the products and appreciate the more intimate, less intimidating store environments. As good as this is for those brands, it is damaging for some of the larger CPG players, which are losing out on the share of male customers and their spending, especially in the premium part of the market.

The natural fit of digital

Another disruptive dynamic comes from the rise of digital. As much as this affects most CPG markets, its impact on male grooming and personal care is particularly pronounced. Overall, men are more likely to shop online than women, especially so for personal care, where physical stores don’t always cater to their needs. 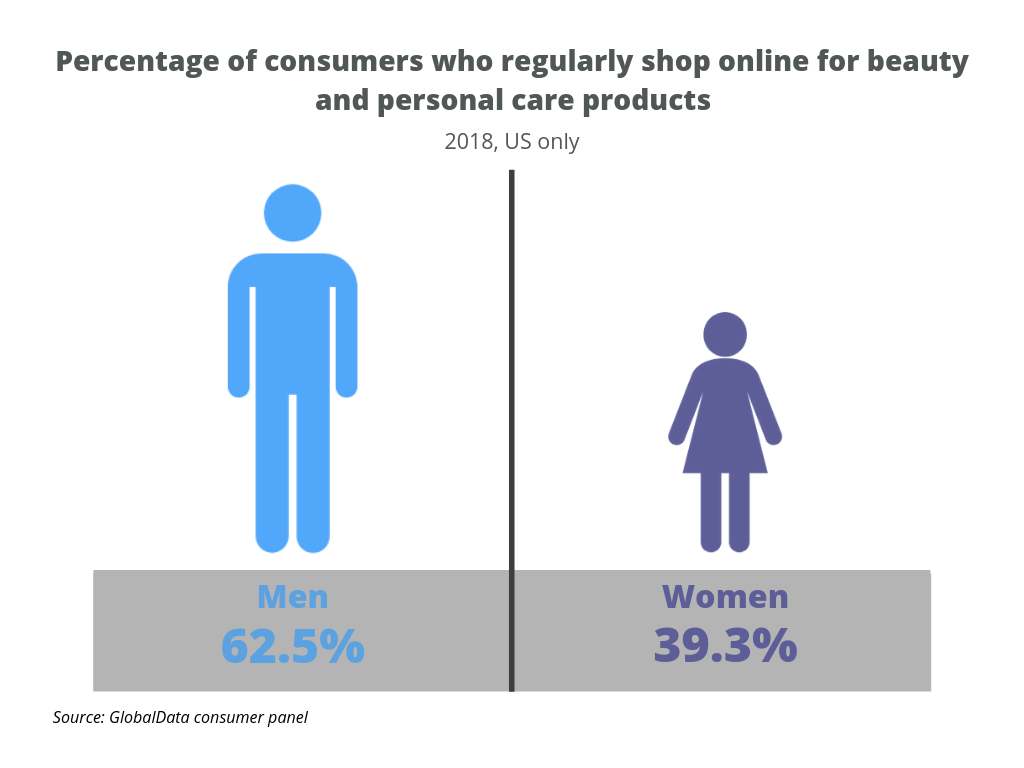 On top of this, there is the habitual nature of some aspects of male grooming, such as shaving. This lends itself to an online subscription-style model, as companies like Unilever-owned Dollar Shave Club have aptly demonstrated.

As positive as the rise of digital is for those brands involved, it also changes the way that men shop. Although men are now more enthusiastic about beauty, they are far less curious than, and not as experimental as, women. This means that, by default, they tend to be more brand loyal and switch far less. Online shopping, where it is often harder to learn about and experience new products, only heightens this dynamic.

In order to capitalize on the growth and to boost market share in male beauty, there are 4 key things that brands must do.

By better understanding the needs of male consumers and by adapting to the disruption in the market, CPG beauty and personal care brands can grab a bigger slice of this lucrative and rapidly growing market.

A case study in disruption: Target and Harry’s

Harry’s was launched on Target’s website on August 10, 2016; a roll out to all stores followed on August 21.

Harry’s started as an online brand, positioned as a high-quality razor sold at a reasonable price. From the site, consumers can buy individual razors (and other products) or sign up for an ongoing subscription service. Harry’s has also been selectively sold in other retailers; for example, Nordstrom.

The rationale for the partnership with Target was to extend the customer reach of Harry’s and to provide Target with a differentiated product in the beauty category, which it is trying to build. Target also wanted to tackle the problem of younger men buying subscription razors online from sites like Dollar Shave Club. Additionally, the two brands have a close affinity in terms of their value for money message.

The initial challenge for Target and Harry’s was to create awareness of the new offer – in and out of store – and to get consumers who were unacquainted with Harry’s to try out the brand.

In stores, Harry’s is allocated around four feet of shelf space. Dedicated POS and a razor display unit strongly differentiate the brand from others in the shaving aisle. End caps were used during the launch to promote the brand. 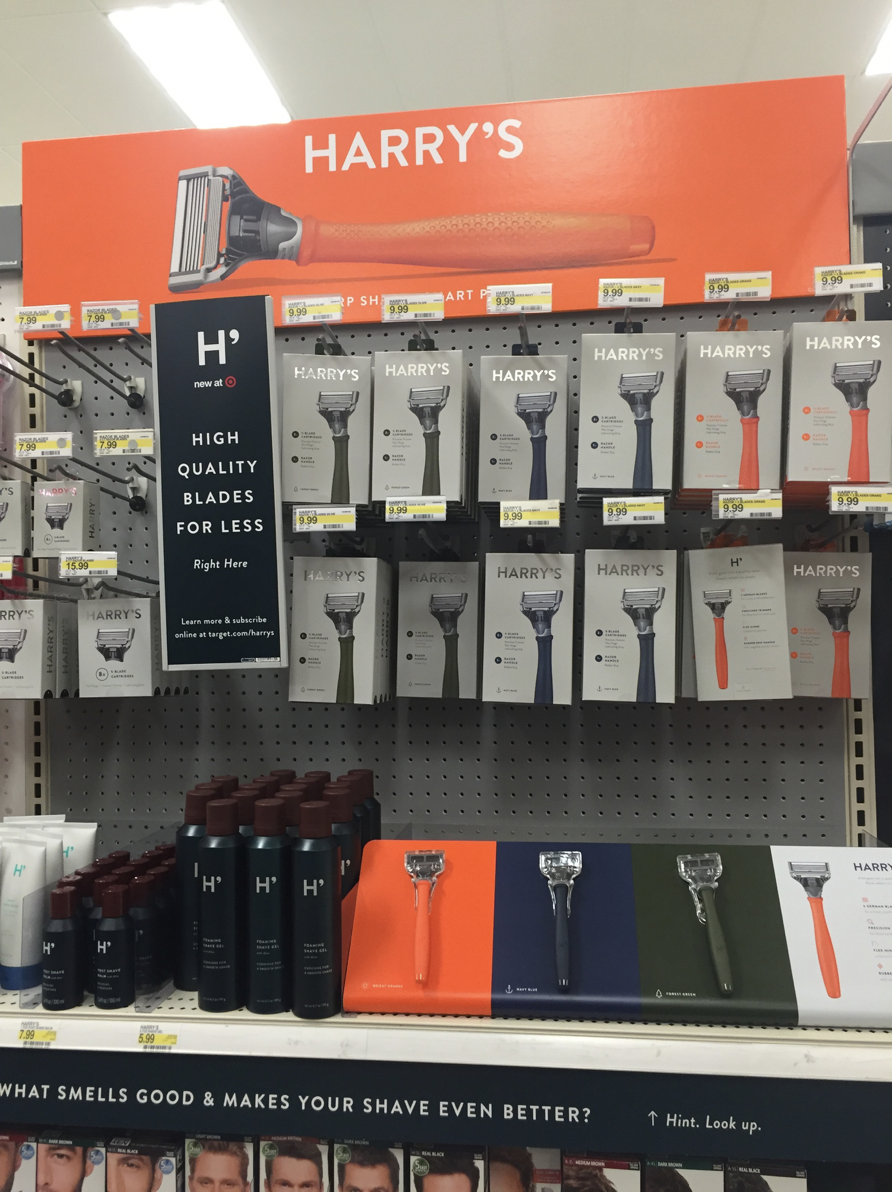 The new partnership was launched at a pop-up space in New York, hosted by Target. An evening event was held with food and free shave kits. Social media was used to promote the launch to a wider audience, and a Snapchat filter was developed to allow Target staff and guests to share content. A limited-edition Harry’s starter kit was offered to consumers during the launch. This cost $5 and featured a razor in Target’s red color with a selection of skincare and shave products.

In line with a number of other consumables, Target offers a subscription plan for Harry’s razors. This is promoted online and comes with a discount over the standard price, as is the case for all Target subscriptions. 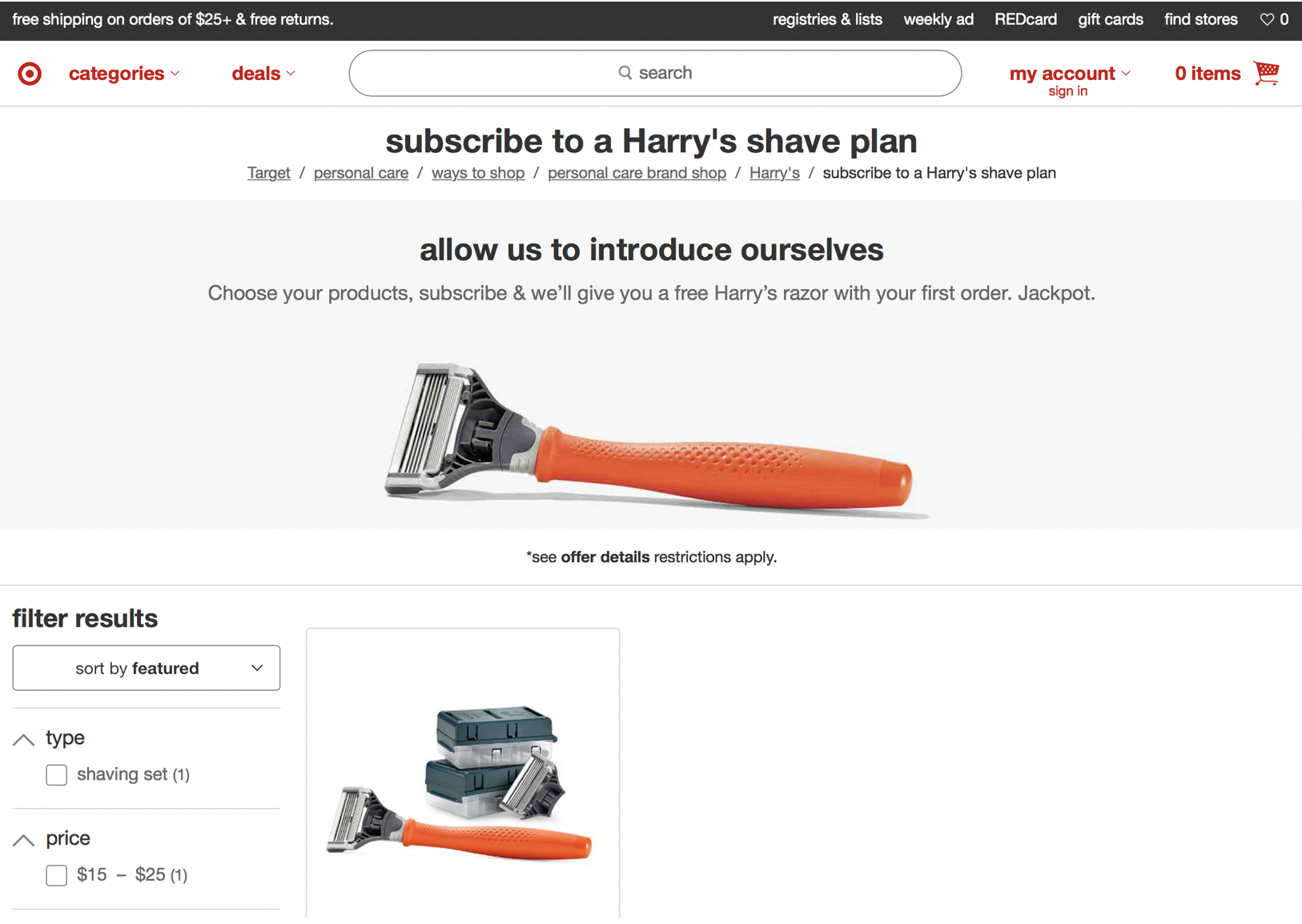