The Evolution of the CPG E-commerce Executive

In the early days of the internet, many CPG companies scrambled to create new roles to help them capitalize on the growth of e-commerce. Reflecting the thinking of the time – that online was a separate channel distinct from the main business – these positions were often siloed and divorced from other functions.

However, over the past ten years, the way in which consumers use online has shifted. So too has the thinking of CPG firms regarding the functions they need to drive growth. This article explores the changing online landscape and how it relates to the new roles being created within consumer-facing companies.

It is fair to say that in the internet’s infancy, most retail and CPG companies did not take e-commerce all that seriously. At best the channel was seen as something of a distraction, at worst a passing fad. Few foresaw the impact it would ultimately have on consumer behaviors and decision-making. For that reason, many firms were initially slow to adapt to digital. 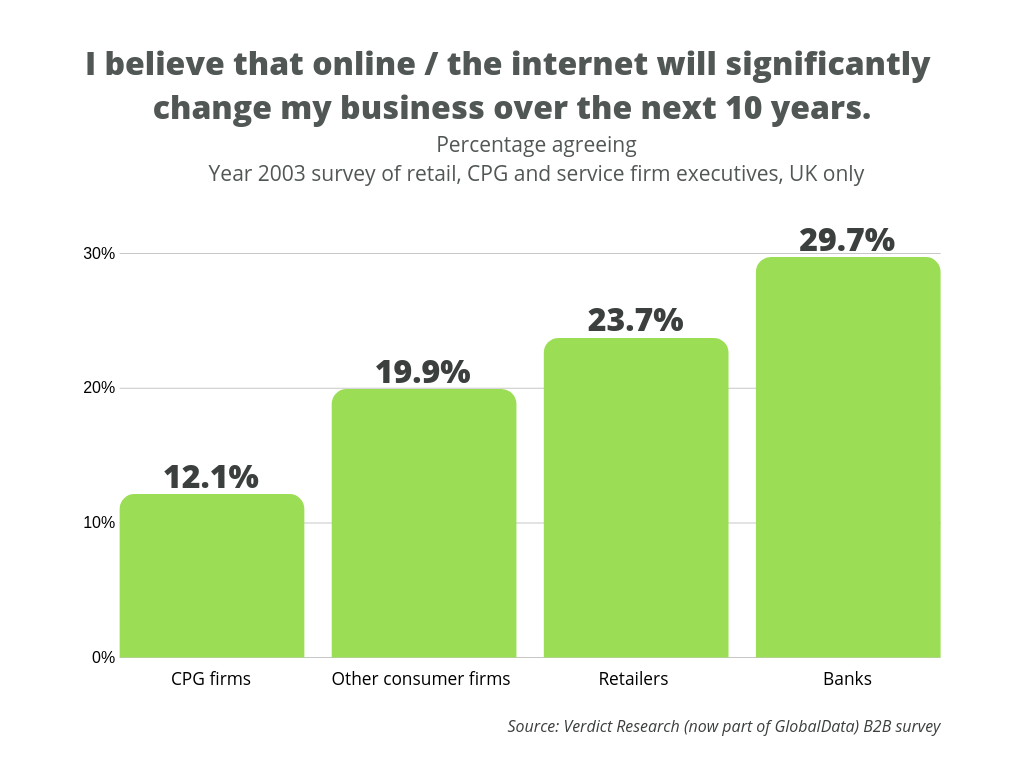 As online grew, perceptions started to shift, and views changed from skepticism to acceptance that the channel was here to stay and would have an impact. However, among both retailers and CPG firms, the prevailing opinion was that online would be a separate channel from the mainstream business and that most consumers would never fully embrace it.

This view is why some of the earliest attempts at e-commerce involved creating dedicated roles such as e-commerce managers and directors. These positions were often ill-defined and not fully integrated into the business. They often served, largely, as a means for CPG firms to feel like they had covered the base of online selling. 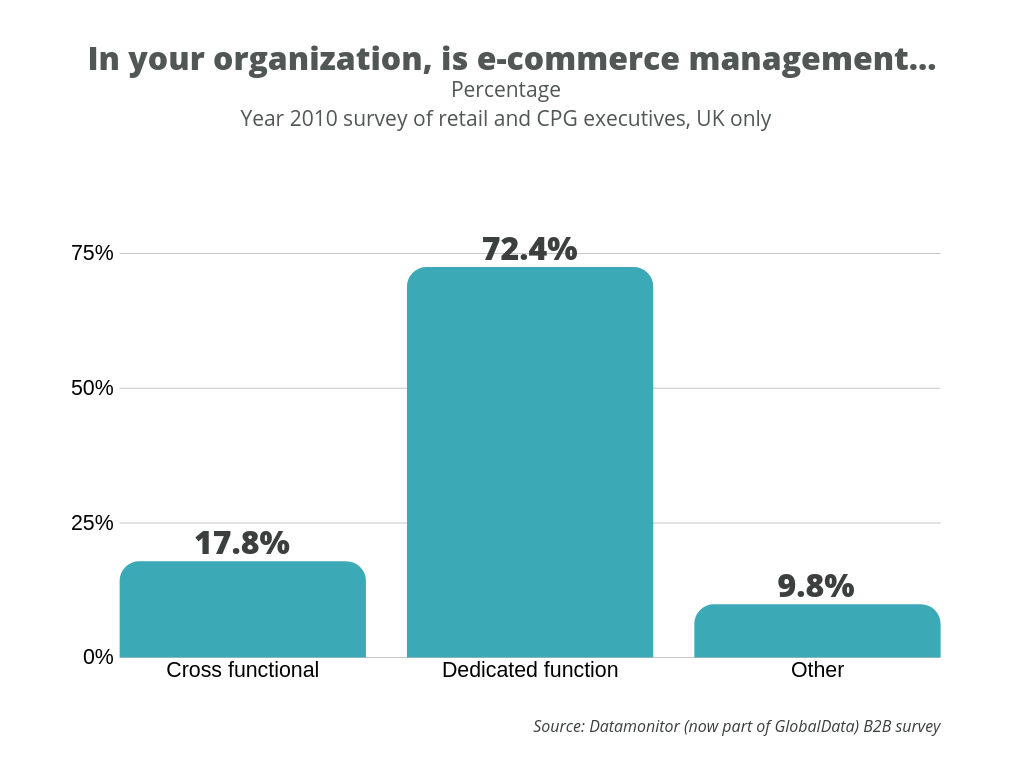 Around 2015, views about online started to change at CPG firms. Faced with incontrovertible evidence that e-commerce was creating far-reaching disruption, companies began to think more carefully about the organizational shifts that might be needed to allow their organizations to thrive.

It also became clear that, rather than being a separate channel, consumers were utilizing the internet as part of a wider ecosystem of channels and tools. This led many companies to the conclusion that their own internal structures needed to reflect this seamlessness. If the internet was pervading all parts of the purchase process, it also needed to be ingrained into the thinking of all parts of the organization. 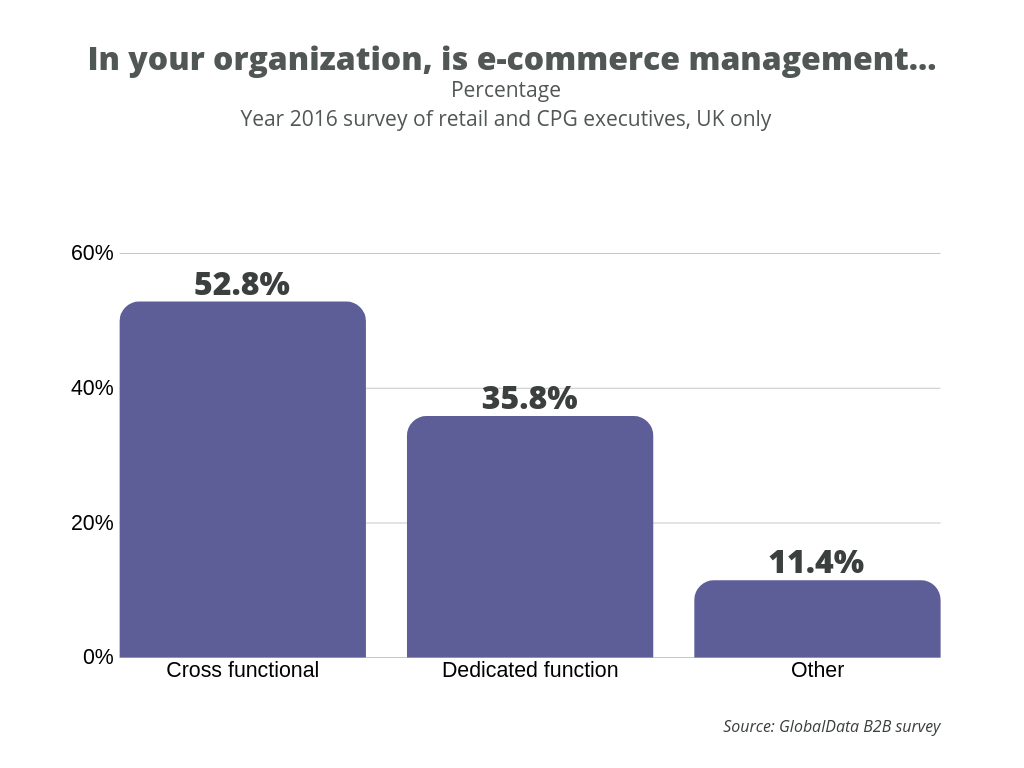 The importance of e-commerce across CPG organizations is evident from the many areas it now impacts. These include:

With e-commerce touching so many areas, it is clearly no longer a stand-alone department or something that can be managed in a silo. It has to be infused across all parts of a CPG organization.

A new role for new times

In response to the significant nature of e-commerce and its widespread impact, many CPG firms have looked to change their structures. Looking at leading firms in the industry, some of the best practices are:

There is no one ideal future organizational model. There are different solutions for different CPG firms. However, the general direction of travel is clear. All parts of CPG firms are being touched by digital disruption, and that means an integrated approach to e-commerce is required. Responding to the new ways of shopping is moving from being the responsibility of one team to being the duty of all employees.