Super Bowl is the second largest food consumption day after Thanksgiving. This year, Super Bowl watchers planned to spend an average of $81 per person on game day festivities. Of this planned spending, viewers estimated that 79% would be on food and beverages.

This year, millions of consumers searched for their game day menu items online. According to OneSpace data, search volume for terms like “Super Bowl snacks” and “Super Bowl party food” peaked in the seven days before the game. So exactly what types of game day food are online shoppers looking for?

OneSpace analyzed consumer search behavior across 17 different online retailers during the four weeks leading up to and including Super Bowl LIII, identifying the terms consumers searched for most in key categories such as Frozen Appetizers & Pizza, Meat & Seafood, Chips & Crackers, Beverages, and Alcohol. Here’s what we found.

Nielsen reports that online wing sales in the seven days leading up to and including the Super Bowl catapulted from $7,984,198 in 2017 to $11,562,723 in 2018, a 45% increase. This year, in addition to chicken wings, OneSpace found that pizza, shrimp, chicken nuggets and meatballs were the frozen appetizers consumers searched for the most. Hot Pockets, corn dogs, pizza rolls and chicken tenders were also popular.

Many of the top 10 search terms in the four weeks leading up to and including Super Bowl LIII, including shrimp, chicken wings and chicken nuggets, were searched for more in January than in any month in the previous three quarters. 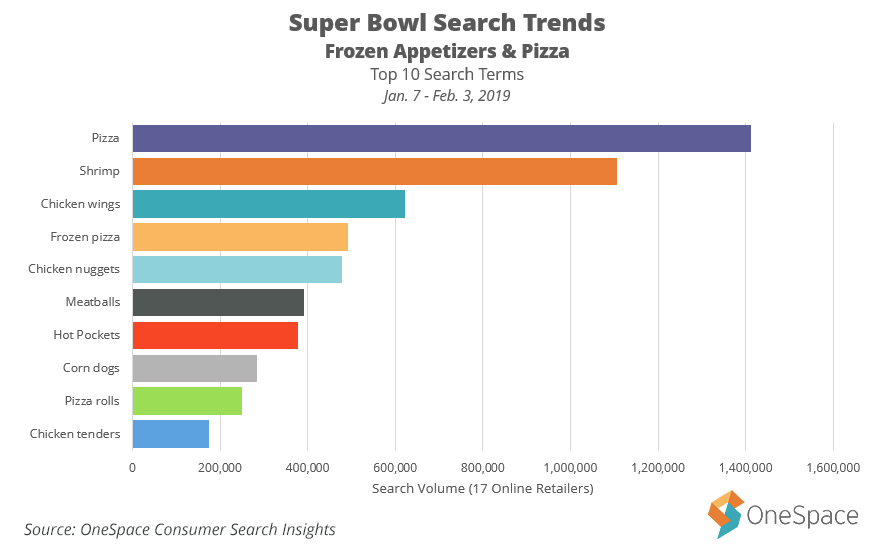 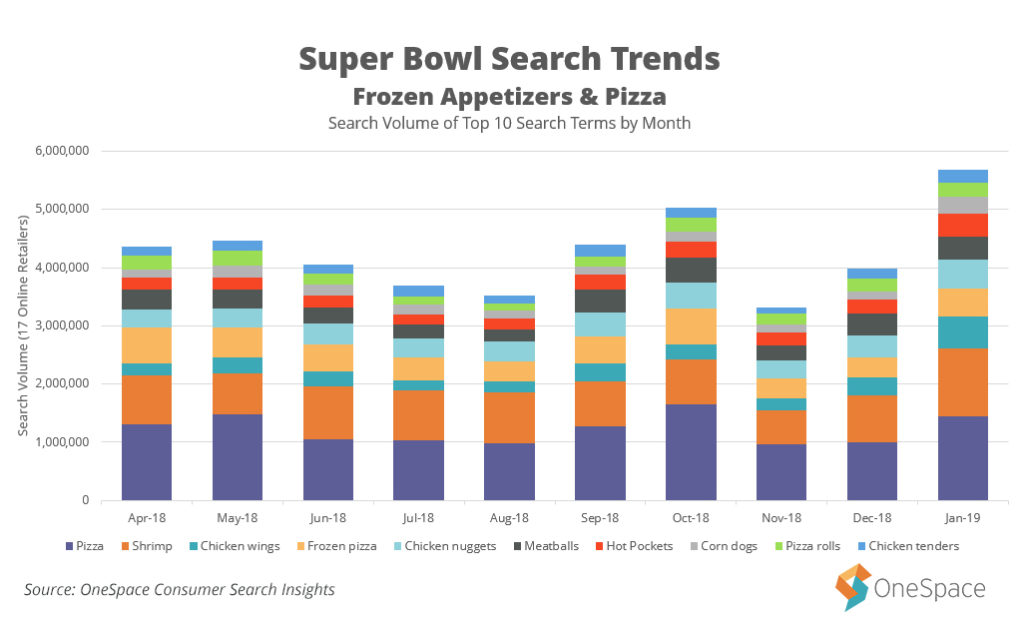 When it comes to the most popular meat and seafood served on game day, consumers focused their searches on chicken, ground beef, bacon, salmon and sausage, as well as tuna, ham, ground turkey and steak.

January was a big month for searches in the Meat & Seafood category, with eight of the top 10 terms – including chicken and ground beef – hitting their peak over the previous three quarters. 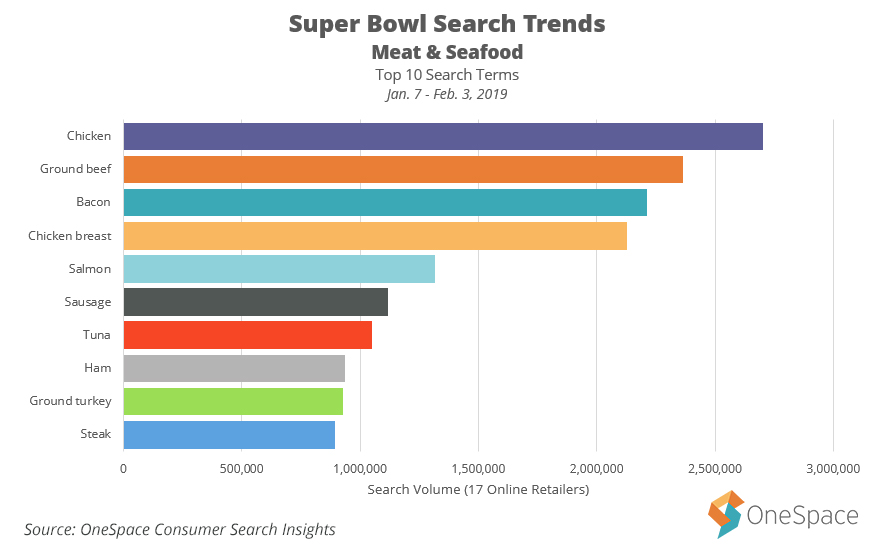 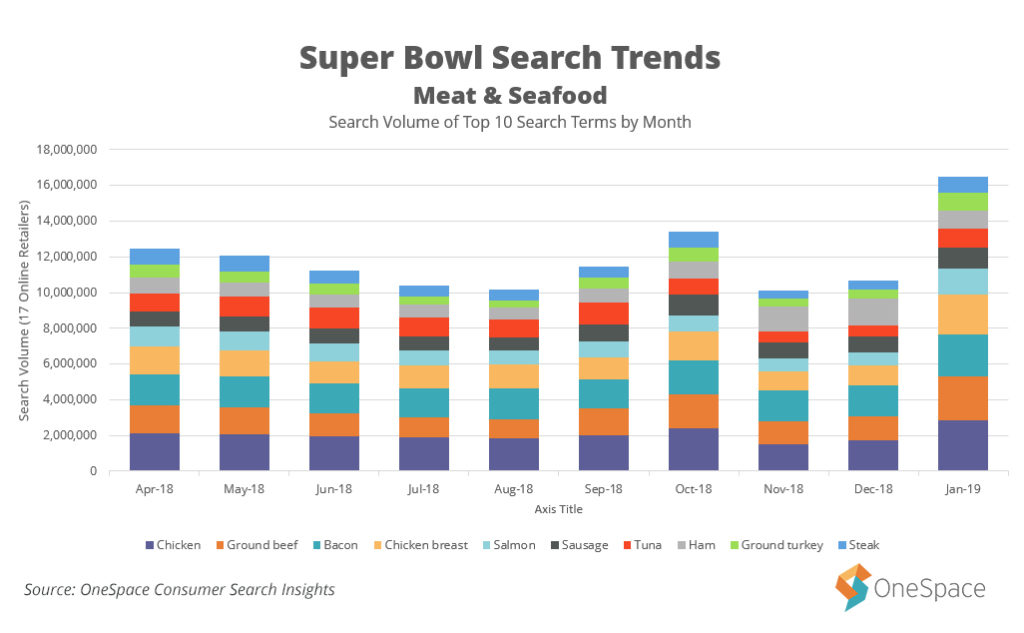 Crunchy and salty snacks are another game day staple. OneSpace found that during the four weeks leading up to and including the Super Bowl LIII, online shoppers were most interested in chips, popcorn, crackers, tortilla chips and pretzels. Trail mix, Pringles, Doritos, Goldfish and pork rinds were also popular. Surprisingly, potato chips did not appear in the top 10 most searched-for terms. 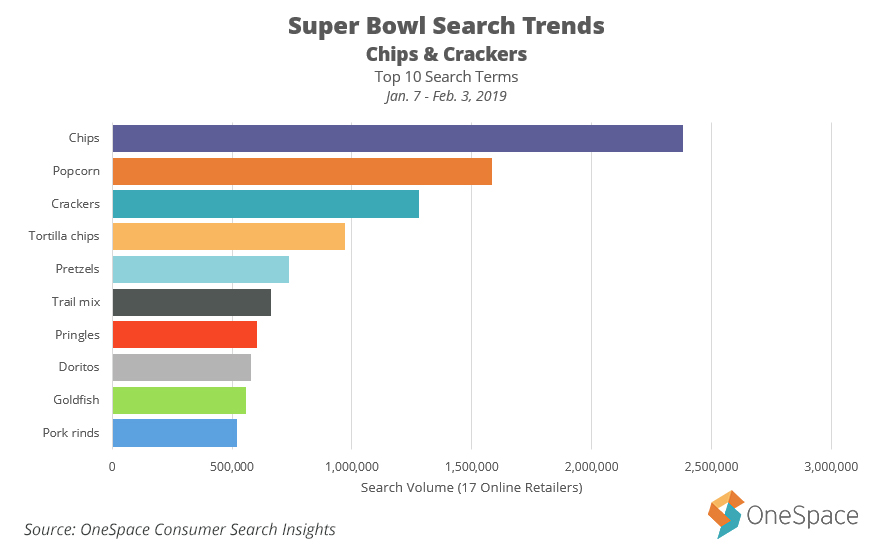 What’s a salty snack without a savory, delicious dip? This year, in terms of search behavior, the dips consumers were most interested in were salsa, hummus, guacamole, queso and cheese dip, as well as French onion dip, pico de gallo, nacho cheese and salsa verde. For 60% of these terms, including salsa, hummus and guacamole, January was the highest month for searches over the previous three quarters. 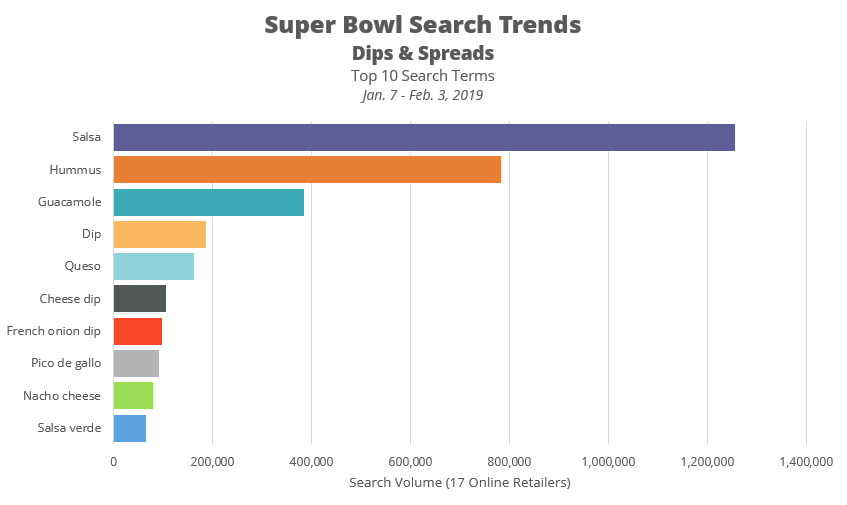 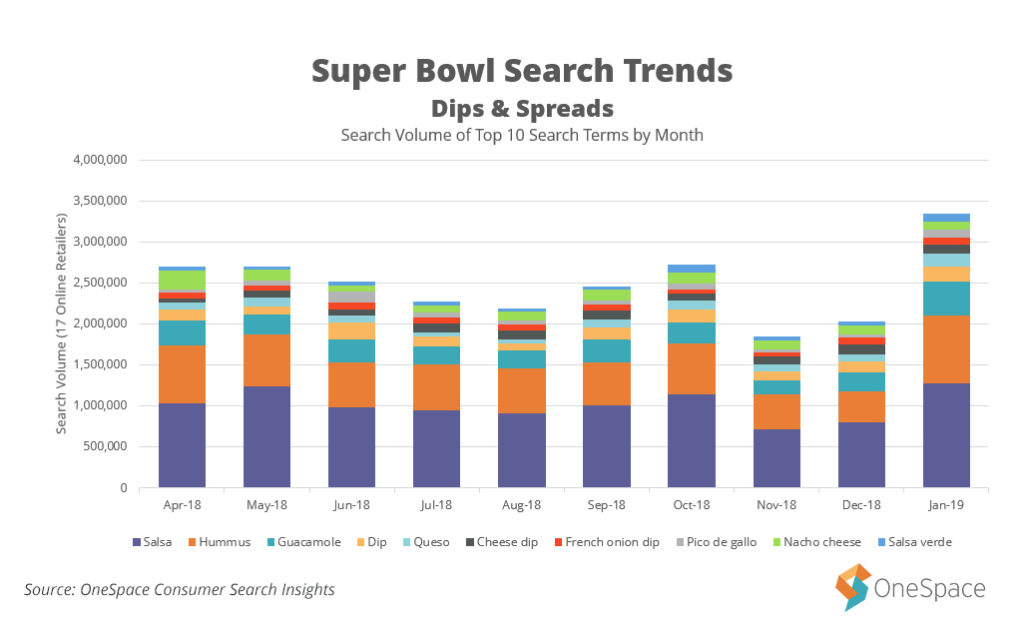 This year, consumers were most interested in cream cheese, shredded cheese, Parmesan, cottage cheese and mozzarella. Sliced cheese, cheddar, string cheese and cheese sticks were also popular. All 10 of these terms were searched for more in January than any month in the previous three quarters. 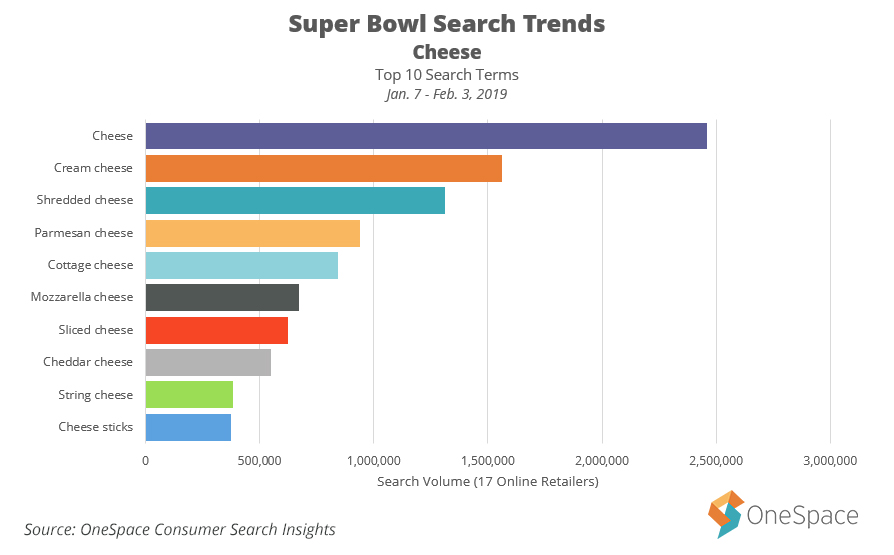 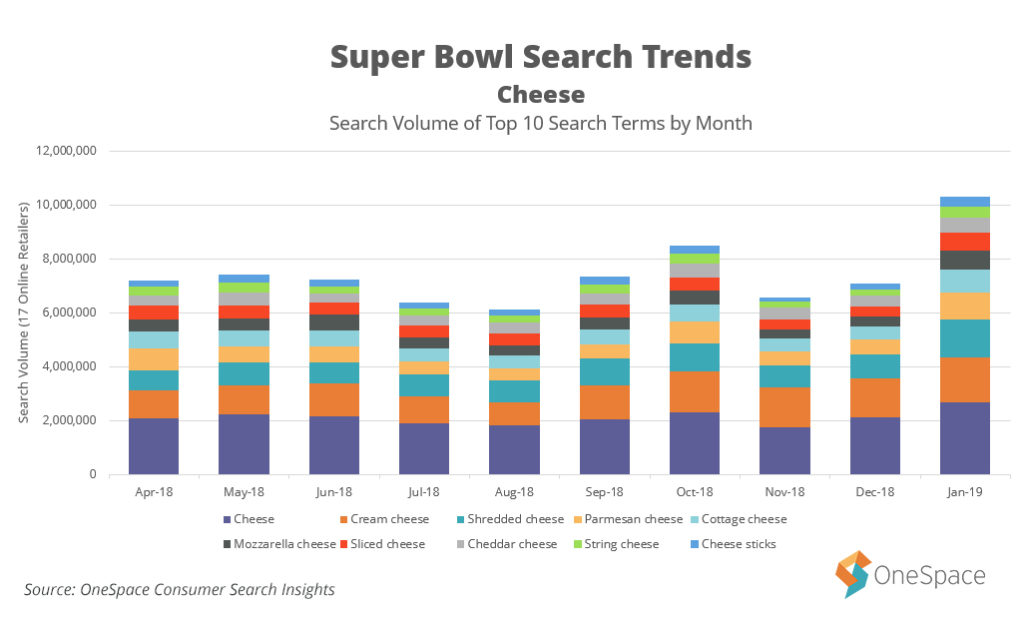 Whether in dishes or for dipping, fresh produce is a popular part of most Super Bowl spreads. This year, online shoppers searched for bananas, potatoes, onions, apples and carrots the most. They also searched for broccoli, lettuce, salad, spinach and tomatoes. As with cheese, all 10 of these terms were searched for more in January than any month in the previous three quarters. 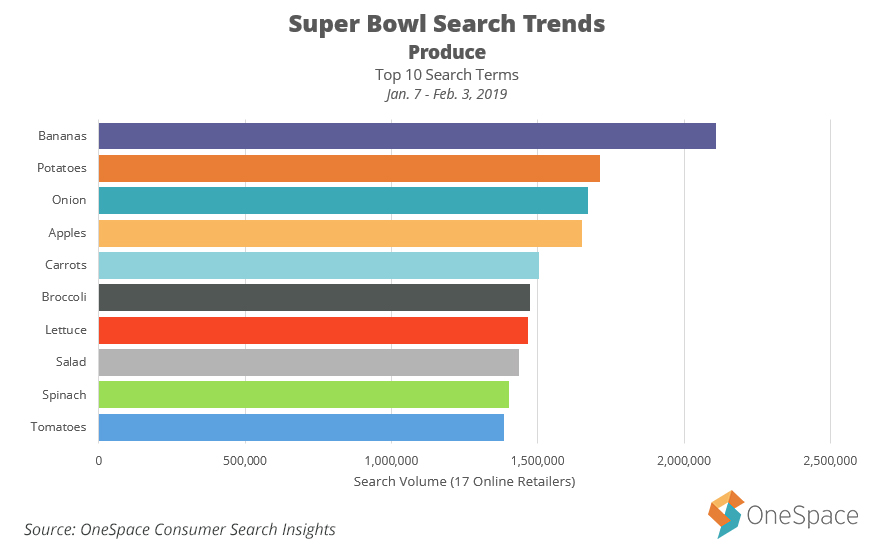 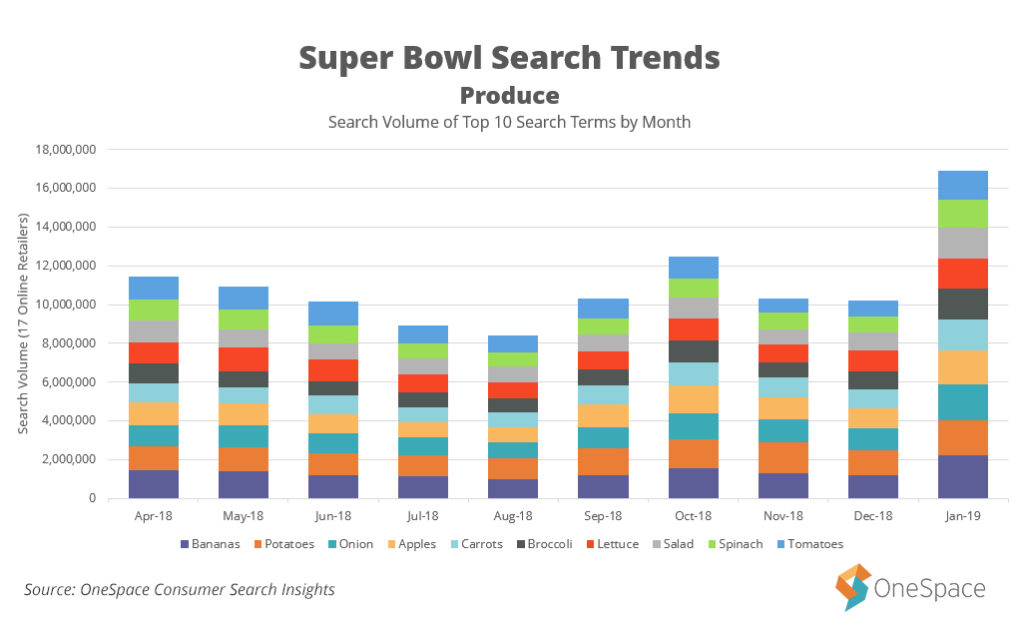 The non-alcoholic beverages consumers searched for the most in the four weeks leading up and including Super Bowl LIII were milk, coffee, water, tea and almond milk. Other popular search terms include orange juice, bottled water, Gatorade and juice. Surprisingly, except for Coke, soda did not make the top 10. 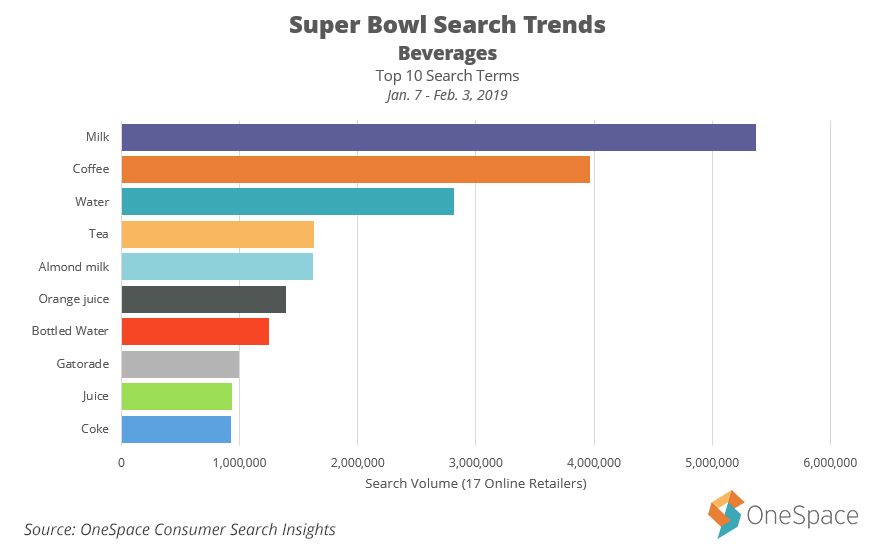 While the Super Bowl is typically synonymous with beer, OneSpace found that more consumers searched for wine leading up to game day. As with other categories, online wine sales are growing fast, jumping 46% from $716,792 on Super Bowl Sunday 2017 to $1,047,993 on Super Bowl Sunday 2018. Other popular choices in terms of search volume include vodka, whiskey and bourbon, along with champagne and tequila. 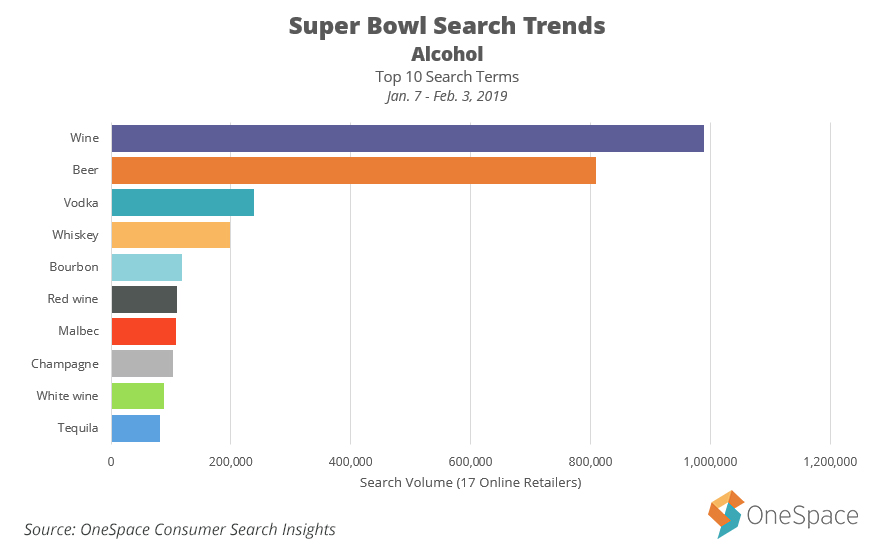 While virtually nonexistent in the weeks leading up to the game, searches for “organic beer” spiked on Super Bowl Sunday, presumably due to Michelob Ultra’s ASMR-inspired ad for Pure Gold, its organic light beer. Ingredient- and other attribute-based searches like this are poised to grow fast, as today’s consumers are demanding more transparency from retailers and brands than ever before. This is evidenced by the fact that Bud Light used a significant part of its Super Bowl ad spend this year to tout the fact that its beer doesn’t use corn syrup, igniting an industry-wide debate.

What Brands Can Do

With more and more consumers now researching and ordering their grocery products online, it’s imperative for brands to have a robust e-commerce strategy that capitalizes on seasonal trends such as the Super Bowl.

One of the most fundamental components of this strategy is search visibility. Brands must understand the terms that consumers search for the most during special events and holidays, and they must optimize their listing page content to ensure their products appear as close to the top of search results for these terms as possible.

OneSpace helps you optimize your product content at the speed of e-commerce. Our ongoing optimizations and maintenance activities are driven by seasonal trends, updates to retailer requirements, consumer search behavior, the paid search landscape, and your competition.

Contact us today to see how OneSpace can help you optimize your product content at unrivaled speed and scale. 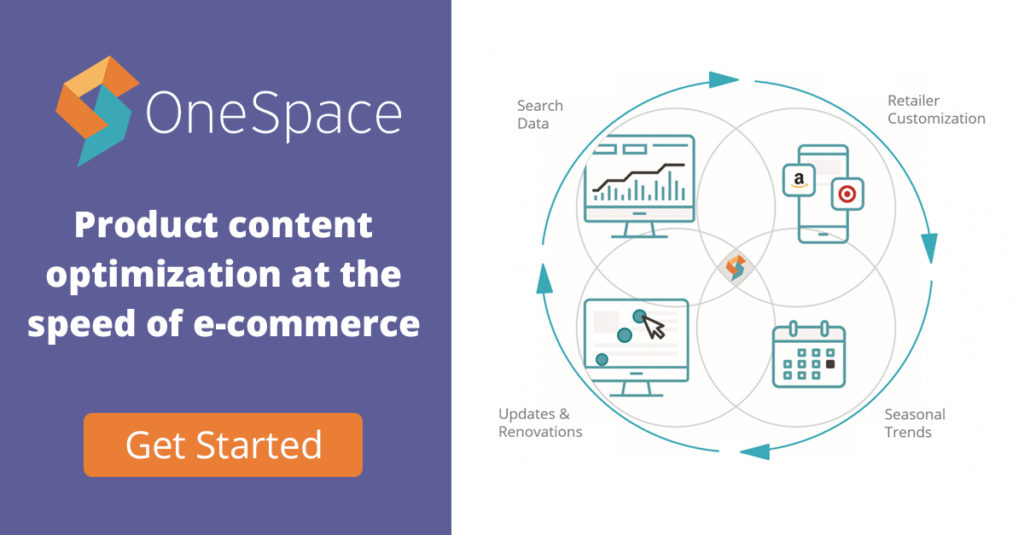